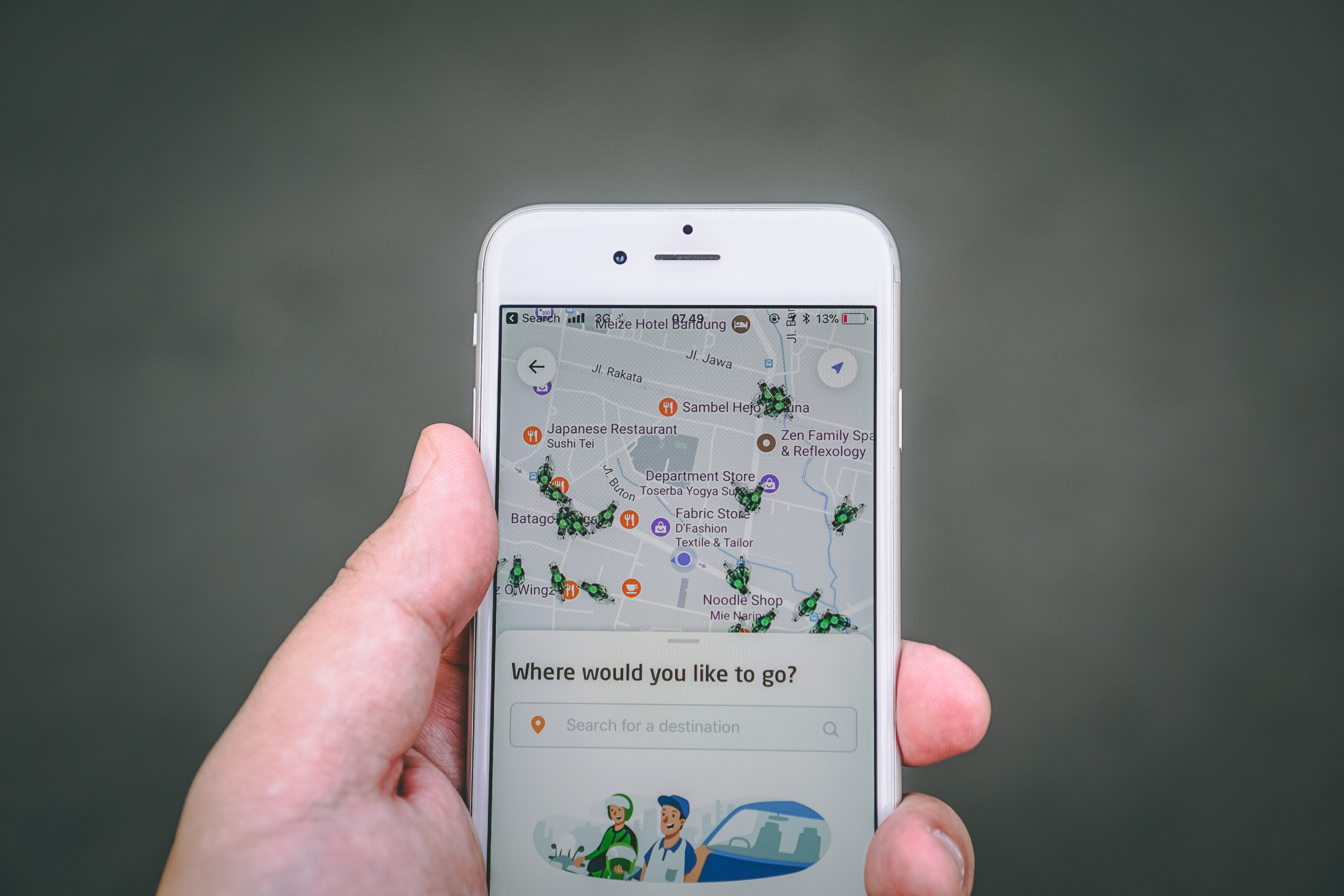 Productivity is an intense preoccupation. It’s an antidote to the precariousness for workers in the gig economy. Sustaining that productivity - not just emotionally and existentially - but financially is a constant struggle.

India stands to lose 135 million jobs because of the pandemic - a likely push for the full-time workforce towards the gig economy.

That’s also probably why there’s never been a more compelling time than now to understand the gig economy verse.

To put that statement into perspective, here’s a quick look at India’s gig economy - 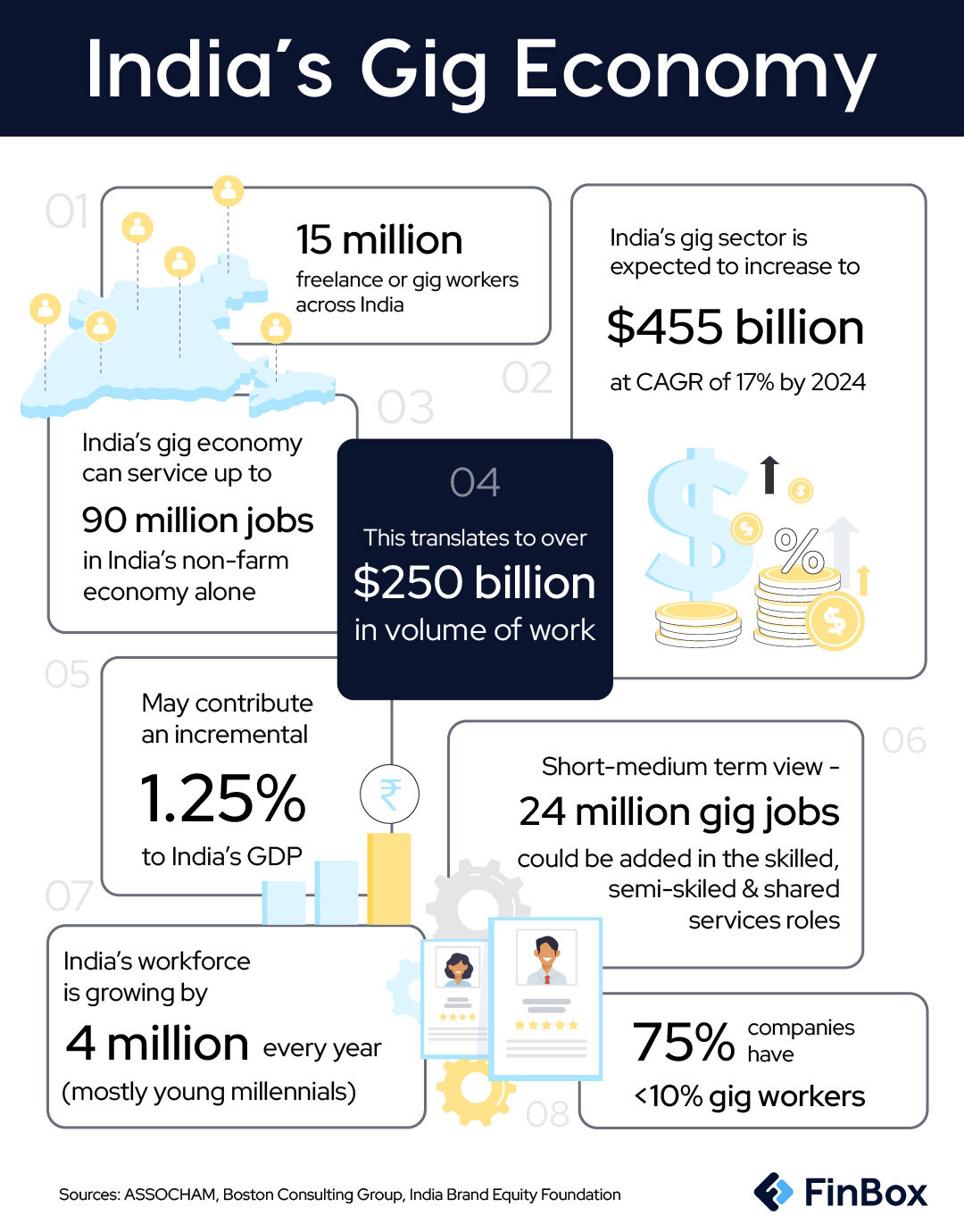 To say the least, the last two years of the pandemic has upended traditional notions of a workplace and work itself. Pandemic-induced remote working has blurred skeptic notions over the efficiency and dependability of contractual/part-time employees.

That said, even before the pandemic, the past decade alone saw an advent of ridesharing and delivery platforms that formalized the terms “gig work” and “sharing economy” in India.

Unicorns like Ola, Uber, Swiggy and Zomato have emerged as a major driver of this gig economy. Contractual freelancers in both skilled and unskilled jobs are hired to reduce costs. Multinational companies (MNCs) have taken to “flexi-hiring” to reduce operational costs. According to India Brand Equity Foundation (IBEF), 75% of these MNCs have less than 10% flexi-hires but are expected to rise across industries. 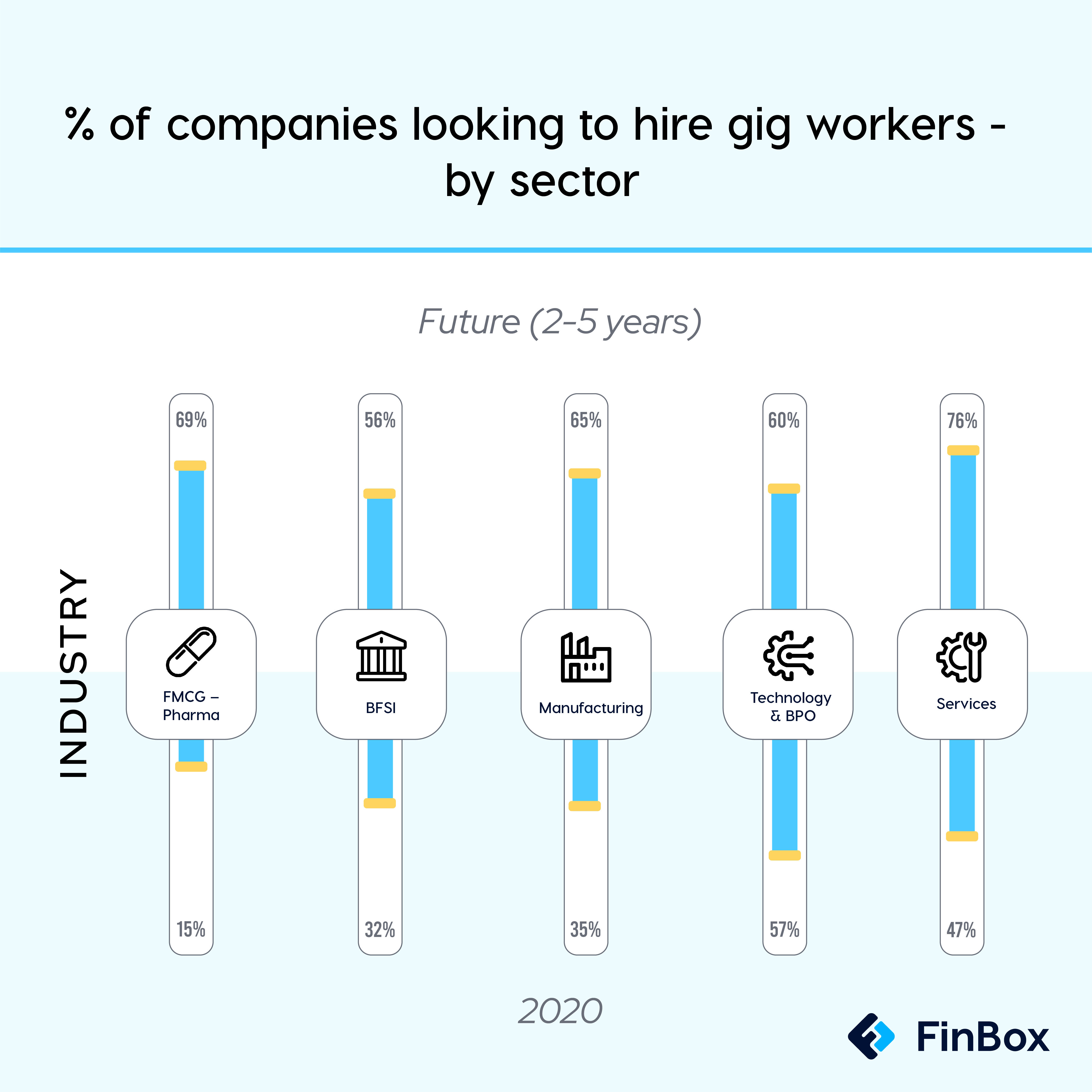 Some of the biggest companies in retail, technology, food and beverage, home services etc (think Amazon, Urban company, Big Basket and the likes), hire gig workers, putting India on the map as the largest gig employer. Freelancing platforms like truelancer, Upwork, Guru also hire high-skilled knowledge workers. Even minus the pandemic, the  number of freelance platform companies grew from 80 in 2009 to 330 in 2021 - almost like a fitting prelude to  the Covid-19 induced expansion of the flexi-verse.

This Covid-19 induced flexi-verse was about one thing - remote work. But that’s it. We all still had wildly different jobs. It’s the same with the gig work.

We tend to think about the gig economy as one homogenous entity and it could be difficult to segment it, but we’ve tried -

Typically from lower income communities that work for ridesharing platforms or as delivery partners for retail, tech, food & beverage companies. Or even as skilled workers for companies like Urban Company. Blue-collar workers also qualify as gig workers.

These are people that are getting paid for their ideas/content and not for time. Think about freelance content writers, graphic designers, musicians, podcasters, YouTubers, Instagram influencers

Everybody from a real estate agent to an attorney to a carpenter.

Millions of merchants, whether on Amazon or Flipkart.

This can also be segmented based on skill-level, age, gender.

This infographic in the Boston Consulting Group’s 2021 report on ‘Unlocking the potential of the gig economy in India’ is a nifty handbook on how the independent economy is segmented in India. 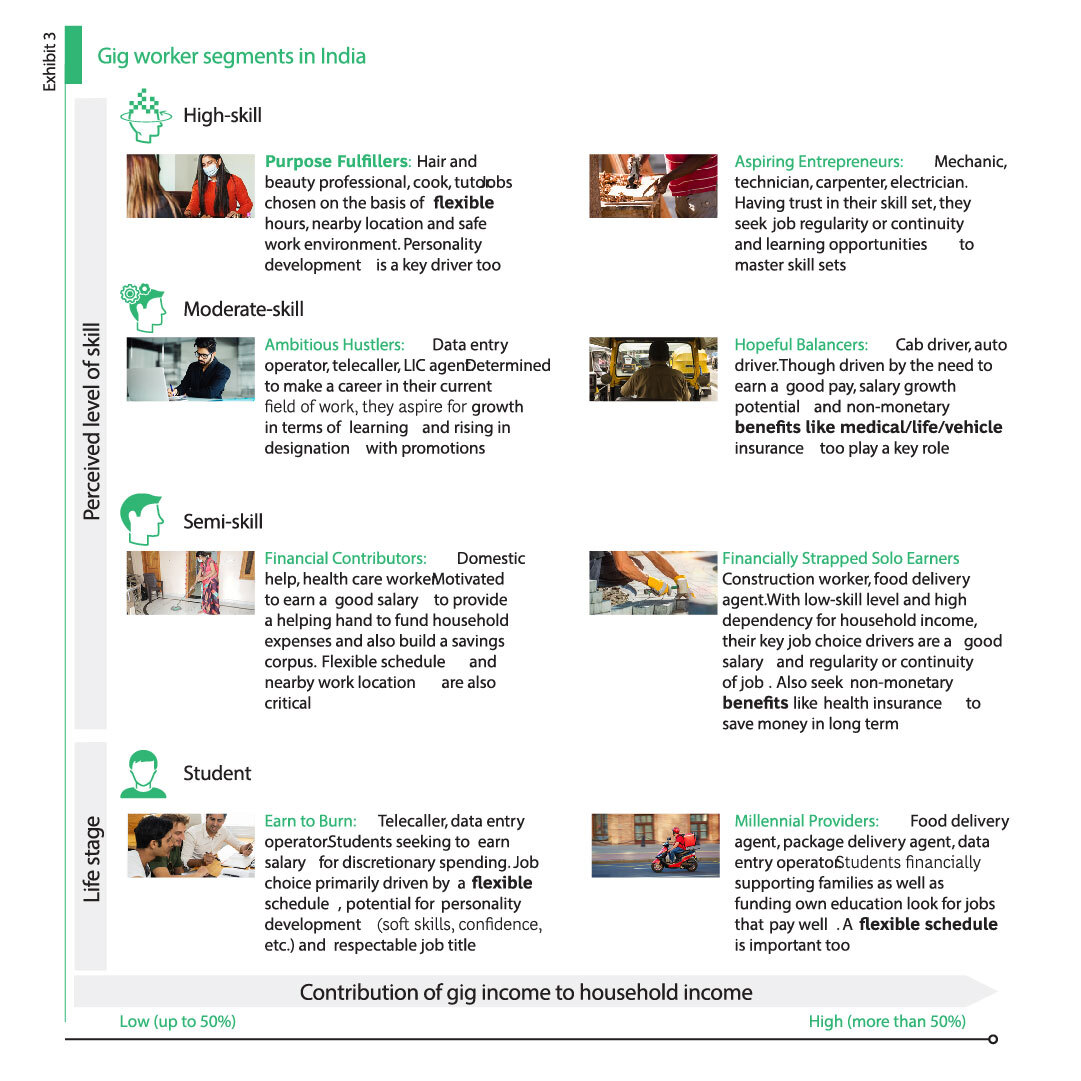 The independent economy is much more than the gig economy. And that’s a critical statement to digest, especially for fintechs.

FinTech is niche, so is the gig economy

The opportunity in this independent economy presents itself as a mammoth. It’s fair enough to assume that it's a mammoth fintechs everywhere are excited to unearth. But the gig economy needs to be dissected.

Consider this - a gig worker driving for a ride-hailing app has less disposable income to pay for insurance premium than a knowledge worker hired by a freelance platform.

As a FinTech looking to crack insurance for ‘gig workers’, providing a horizontal tool for the Uber driver and the freelancer would be thoughtless.

The UK-based $1 billion insurtech Unicorn Zego, works with ridesharing and delivery platforms, to insure its gig workers in a way that traditional insurers can’t. Data-driven, Zego sells insurance by the hour - it collects data on when people are working and where they’re driving/riding and assess risk more precisely.

The Zego-per-the-hour won’t work for someone renting out their room for a week on AirBnB. Or a consultant looking for professional indemnity insurance for a day. Even within micro-insurance, the underwriting risk engines would run differently. Then there are companies providing insurance for freelancers, protecting against mistakes. Like if a wedding photographer’ photographs aren’t good enough for the couple.

And that’s just the need-driven innovation in insurance. There’s much more.

Fixing the gap, one embed at-a-time

Addressing the gig economy as it stands, fragmented et al, is at the core of financial inclusion.

A huge part of the push for this inclusion is policy-dependent. Abysmally low wages/income, no social security, no job security and poor working environment - a rather sterile environment for protests.

A study carried out by the People’s Union for Democratic Rights (PUDR) between September-November 2021 in the Delhi-NCR region showed that for most of the gig workers interviewed, the gig was their primary job. This goes against the popular notion that gigs are side hustles or done for leisure.

Even as gig work becomes the primary source of income for many in India, they remain woefully underserved and financially vulnerable. With the rise of digital work and platforms, gig workers are creating a wealth of data that includes work history, transactions, income, expenditure - a valuable resource for fintechs. They’re also one of the more promising target segments for fintechs  as they are more comfortable with digital channels for personal or work-related purposes.

Digital lenders have already started approaching the gig worker segment, but few have tailored products for savings, investment and insurance. Gig workers cannot afford to rely on traditional credit products because their income streams are fluctuating.

KarmaLife, a financial solutions provider for the gig economy, gives instant lines of credit to blue-collar workers leveraging UPI. Credit is instant and refillable to support their needs when they’re low on liquidity. They also help micro-entrepreneurs linked to platforms like Uber, by providing them working capital to help grow their business.

Another example of a fintech startup customizing solutions to a specific segment of gig workers is South Africa-based start-up, Paymenow. It offers early access to wages for low-income workers in mining, financial services, logistics etc. Additionally, their in-built feature teaches and guides them how to manage their money.

All these solutions - tailor-made and embedded into platforms.

When we talk about innovation in fintech for the gig economy, there are going to be some core horizontal stacks.

Fintechs like us, provide the infrastructure layer in tandem with some of the best banking partners and licensed institutions in the country. We’ve got BankConnect, DeviceConnect and CollectX - FinBox’s proprietary products that underwrite risk and act as an early warning system for collections. This would fit the gig economy like a glove. DeviceConnect, for instance, is a risk engine that gives lenders a Financial Inclusion Score (FIS), an alternate data-based credit scoring system. For gig workers working across platforms, our technology would ensure better access to credit.

That’s what we’re talking about when we talk about fintech.

But we find ourselves asking some pertinent questions -

With every new segment in the gig economy, there’s an opportunity to add enrichment layers for digital infrastructure companies. Sometime in 2021, a mini documentary called ‘play-to-earn’ made its way to Youtube. This documentary showed how some folks in the Philippines, hit hard by the pandemic, earned income through NFTs and cryptocurrencies by breeding, battling and trading digital pets in a game called Axie Infinity.

Think about it - the metaverse, if it is indeed going to be the future of work (as it's so vehemently touted to be), then Fintechs are going to have to think about insuring Axie Infinity players against crypto market risks.

If the economic and emotional roller coaster of the last two years has taught us anything it’s adaptability and quick decision making. Whether you call it the gig economy, the sharing economy, or the independent economy, productivity will continue to be a preoccupation. And fintechs need to fuel the sustenance.