Data dive: What can Mudra’s performance tell us about SME lending in India? │ Part II 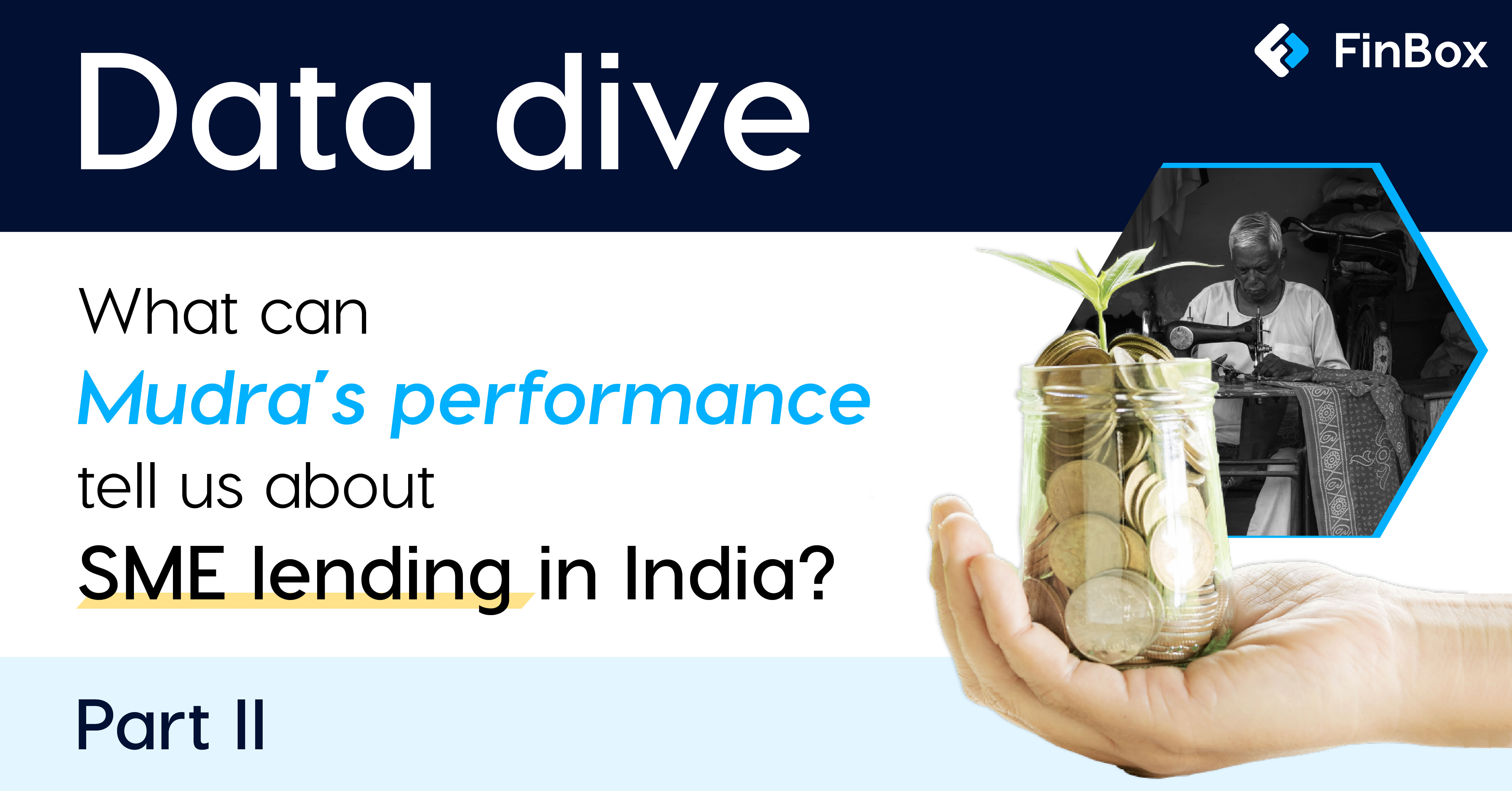 Part I of our two-part series analysis of the Mudra scheme is a stark reminder that even the most well-intentioned schemes can spawn confusion. It laid bare numbers that reveal the limitation of the scheme to make a dent in the SME lending space.

Essentially, the ₹15.52 lakh crore disbursed so far under Pradhan Mantri Mudra Yojana (PMMY) seems to have made little to no impact on income generation or job creation.

Several factors have induced Mudra to lose the plot; here are two rather conspicuous ones. First, the ironic fact that microfinance institutions (MFIs) have had a microscopic role in disbursing microcredit. Second, the sad reality that the scheme’s very structure stymies innovation.

Microcredit has traditionally not been the domain of banks or NBFCs. That’s exactly why microfinance institutions (MFIs) emerged.

Yet, their role in disbursing Mudra loans is rather minuscule in comparison to other players (see the figure below). 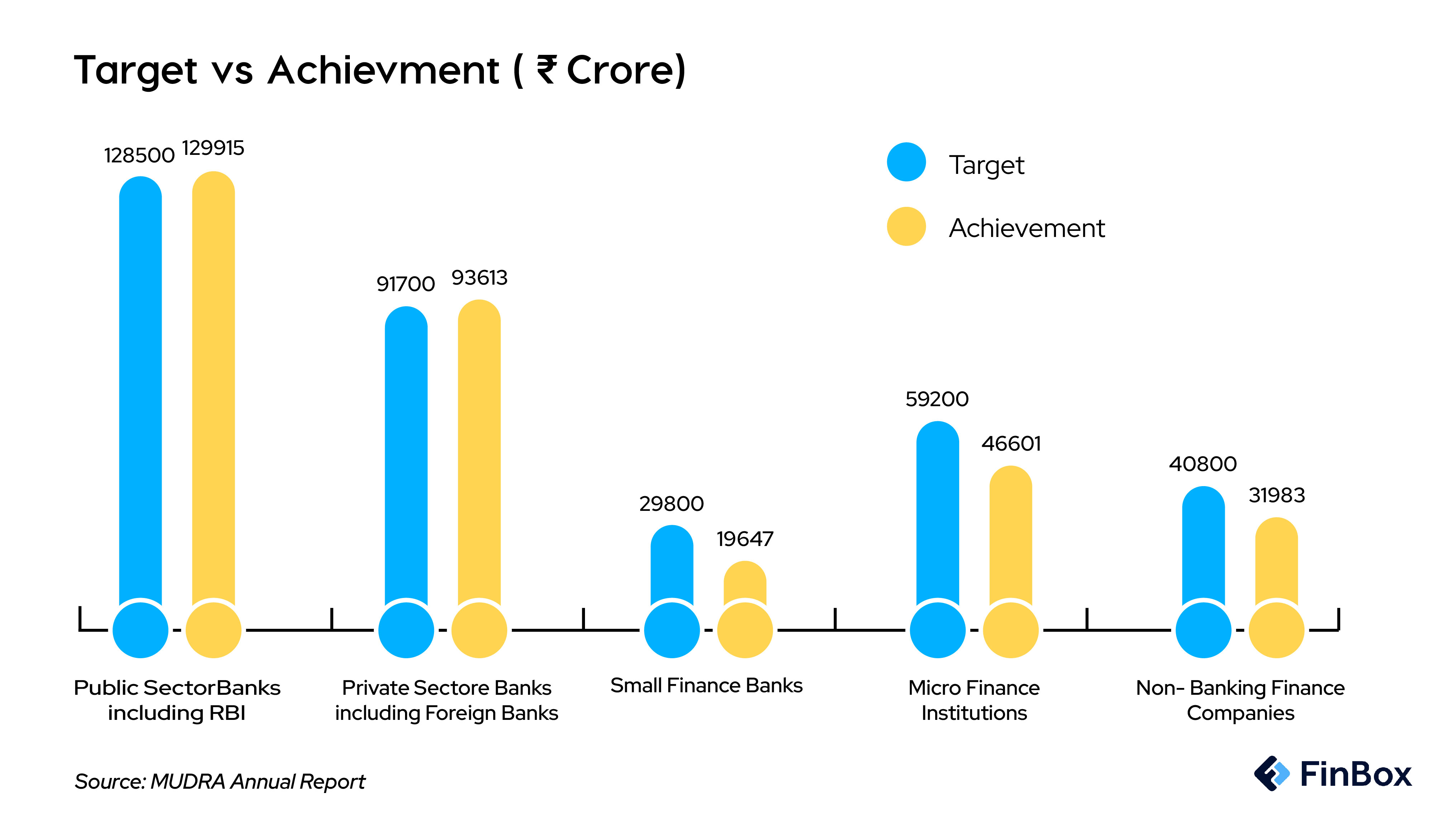 What’s more, MFIs along with Small Finance Banks (SFBs) and Non-Banking Finance Companies (NBFCs) missed their disbursement targets in FY 2020-21, contributing to a 5% decrease in the overall performance of Mudra from the previous year. On the other hand, banks surpassed their targets despite their lack of specialty in servicing microcredit.

You may wonder, why should microfinance even be the forté of MFIs? Why should one worry who gives out loans as long as credit reaches where it's due?

The problem is micro loans disbursed by banks seemingly failed to translate to meaningful income-generating economic activities, and only added to the NPA problem.

So, then have MFIs done a better job than banks?

If you look at it from the lens of loan growth, the MFI sector has managed to grow its gross loan portfolio from ₹0.34 lakh crore in 2014 to ₹2.31 lakh crore as on Sep-2020, at a CAGR of 30%, according to MFIN. But then so have banks. The more important question to ask would be, “Have MFI loans created jobs or improved standards of living for its borrowers?”

We don’t know for sure. However, here are a few factors that point towards a safe assumption about MFIs’ loan performance.

Hence, it would be safe to assume that some attempt has been made to match demand to supply rather than resort to tokenism.

All said and done, this is not to suggest that MFIs are the panacea to the poverty problem. In fact, they come with their own share of problems.

Having said that, MFIs are still the best bet when it comes to microfinance.

Why? Because banks have to start from scratch to give loans to hawkers, shopkeepers, and other such micro units. Also, they incur massive costs to underwrite these small-ticket loans because they will have to find out who these borrowers are. But MFIs are already with them and know their credit histories as well.

Additionally, MFIs have an institutional foundation that fosters local economic development. Their financial products are built on top of social cohesion. Case in point — group finance that’s known to have a very high repayment rate well over 90%— because social solidarity encourages conformity rather than deviance.

MFIs have strong interlinkages with the community that enable them to design and deliver products that address the lifecycle needs of their customers. Community approach is built into the MFI model that allows them to be deeply invested in the outcome of the loan than a banking model can possibly be. What’s more, they have been quick to leverage technology.

Technology as a great enabler

MFIs do a lot of legwork which has been both their strength and weakness. On one hand this high-touch model enables them to build a closed-loop system better equipped to address financial needs, and on the other, adds to cost which in turn makes it difficult for them to give loans at competitive prices.

The branch-led, field officer-driven models were proving to be expensive in a pricing cap regime - which has now been removed by RBI (as recently as Mar 22). So, they were quick to adopt new technology trends for faster loan origination, efficient customer service, and flexible loan requirements using alternate channels.

The entry of fintechs has enabled them to fast-track their transition to a more efficient digital model that has the capability to serve a larger population at lower costs. 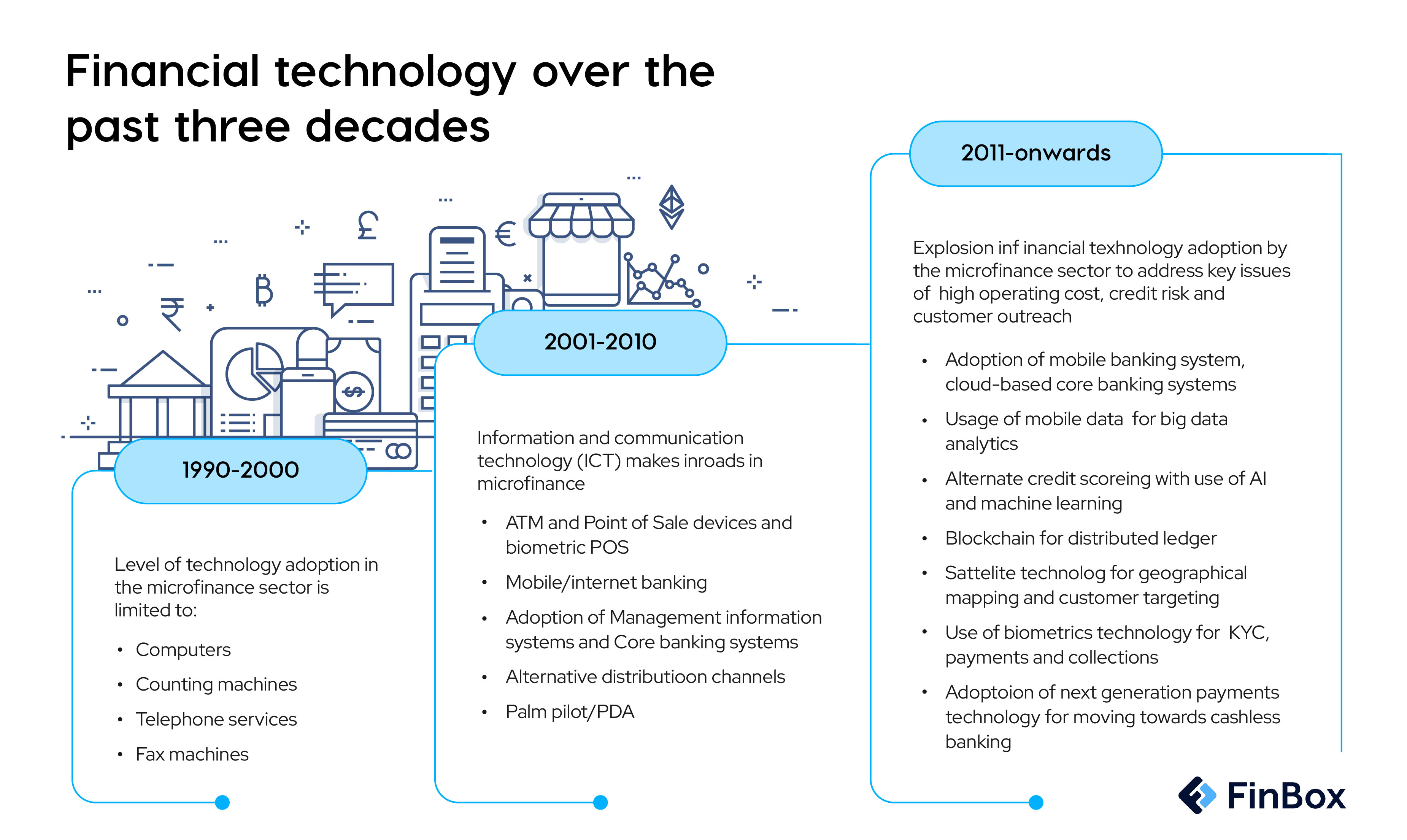 A case study cited in a report by KPMG and MFIN, talks of a leading Indian bank that fully digitised its microlending arm right up to the disbursement phase. It introduced mobile-based solutions to its field executives for the following;

What did this do for the bank?

The bank could develop a graduation model that helped it to successfully design products suitable for the ‘accelerator’ group in parallel with its group microfinance lending.

All this points to one fact — microcredit is built into the very design of MFIs, and they are getting better, rather rapidly, at what they do. Acknowledging this trend at the policy level, and incentivising MFIs to play a pivotal role in the Mudra scheme could go a long way in driving sustainable microcredit.

India — a country of shopkeepers?

According to Part IV A of the Indian constitution it is every citizen’s fundamental duty to develop the scientific temper, humanism, and the spirit of inquiry and reform. But how does one do that if public policies do not encourage or even expect us to be anything other than shopkeepers and rickshaw pullers?

To know how high the bar is set for innovation, you just have to look at the illustrative list of activities covered under Mudra. 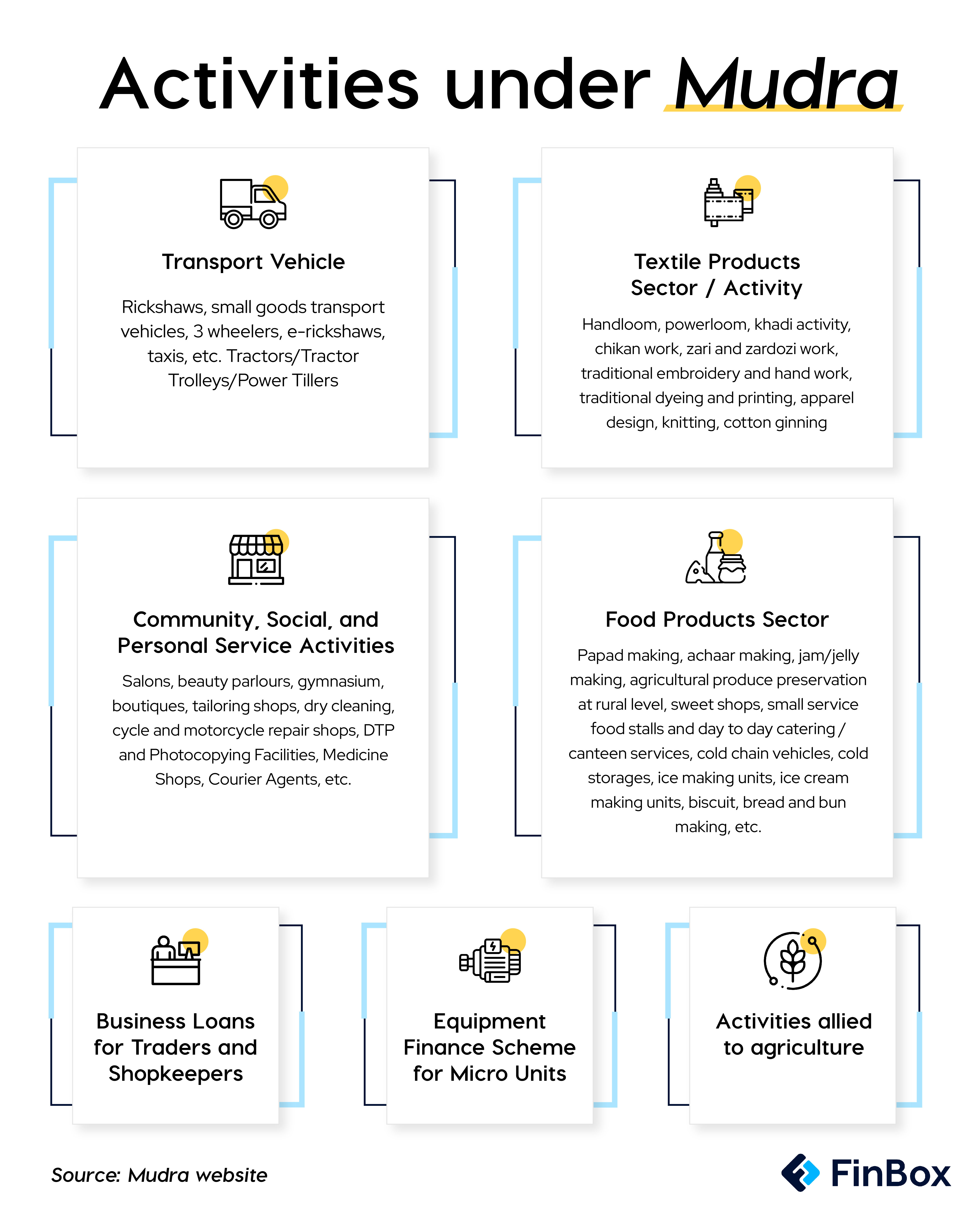 Clearly, more than 80% of the above illustration is about shopkeeping. Can India’s poor not innovate their way out of poverty? Where are the loans for drones, soil testing facilities, economical and innovative farm equipment, cold technology that doesn’t need electricity? Basically, where is the stimulus for innovation?

A study done as early as 2011 shows that there’s one shop for every 20 to 25 families. And then the Amazons and Flipkarts of the world entered India. So, India is truly a nation of shopkeepers, already. What business sense does it make to enable loans for more shops in an already concentrated market?

Certain ideas are engraved in our minds, for instance, rural women making achaar and papad. How do you assume that there’s a vibrant market for achaar and papad? Common sense suggests that such products are typically made in just about every rural household.

It wouldn’t be outlandish to suggest that the Mudra scheme must question its underlying assumptions, which as things stand are rather misleading.

The sum and substance is that microfinance should be understood as a resource reallocation policy tool more than anything else. It’s very important to keep close watch of the underlying assumptions, or it may lead even governments to read into numbers. Above all, a wide variety of metrics ought to be used to measure performance. Claiming success based on just the cumulative amount and number of loan accounts couldn’t have been more wide of the mark.