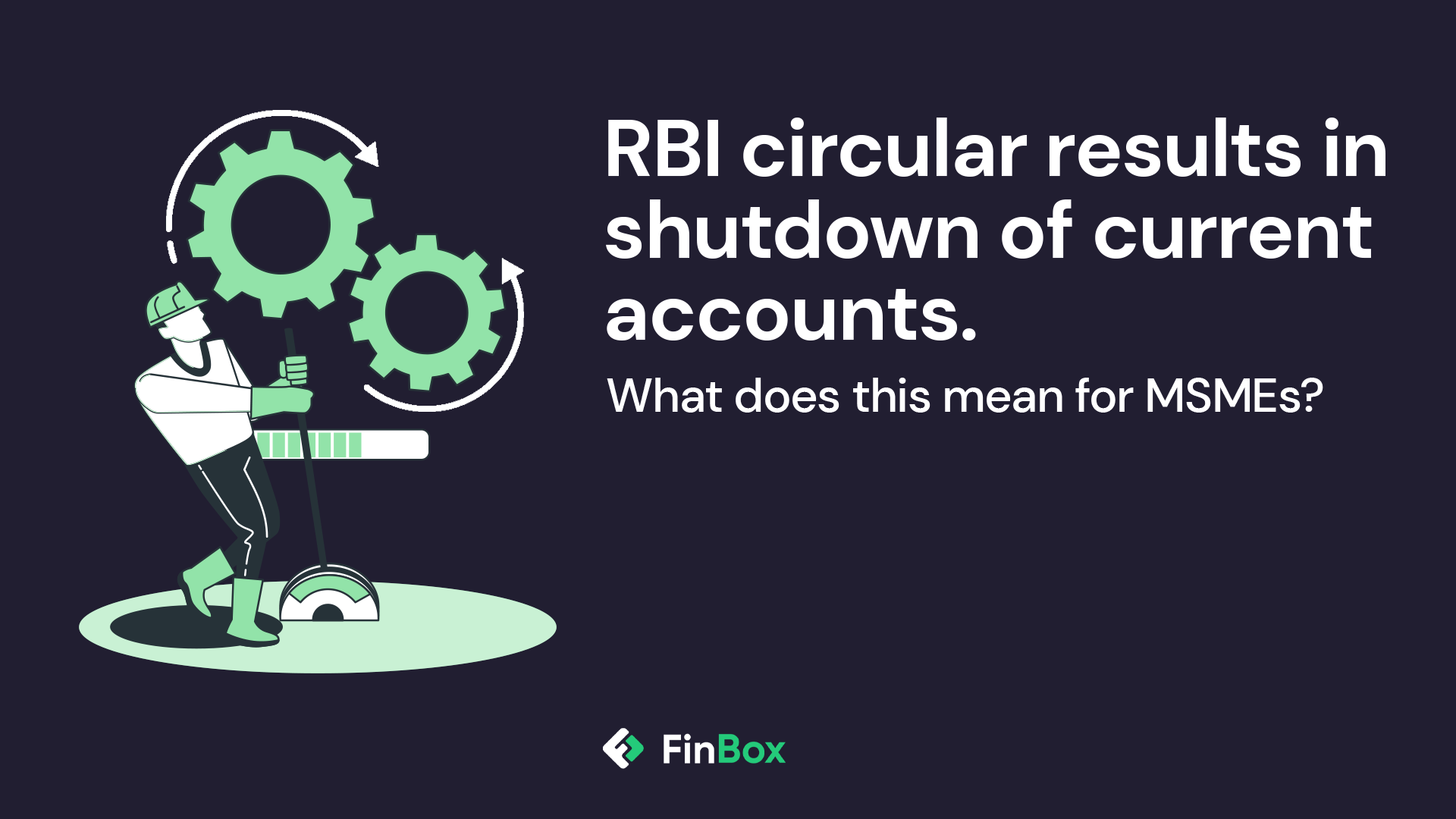 Update: As of August 4, the RBI has given banks time until October end to implement the new rules on current accounts issued in 2020. According to the latest guidelines:

On Monday, August 2, certain small business owners across the country woke up to frozen current accounts. With no prior intimation, this move plunged Micro, Small and Medium Enterprises (MSMEs) into complete operational disruption, halting their day-to-day activities and stalling payments. Any attempt to release their funds will take a fortnight to a month.

This account shut down was a long time coming - back in 2020, almost to the day, the Reserve Bank of India had issued a circular to banks on the ‘need for discipline’. The circular said that a bank could not open a current account for a business if their exposure was less than 10% of the borrower’s total exposure to the banking system.

As per the directive, no bank shall open current accounts for customers who have availed credit facilities in the form of cash credit (CC)/ overdraft (OD) from the banking system and all transactions shall be routed through the CC/OD account.

Simply put, in case where a bank’s exposure to a borrower was less than 10% of the borrower's total exposure to the banking system, debits to the CC/OD account must be credited to a bank whose exposure is more than 10%.

This move seemed to be aimed towards minimizing inactive accounts and the excessive rerouting of funds. Banks had initially been given three months to comply, a deadline that was extended to end July of this year. However, many failed to do so, and instead shut down their current accounts come 31 July.

The circular was ostensibly meant to stop the practice of borrowers utilizing the credit facilities of one bank and then transferring the funds to another where they transact. MSMEs typically have a variety of banking partners, working with each for different financial requirements - shutting down any of these hurts their business significantly.

These circumstances point to an unfortunate truth. While regulatory interventions are meant to fix the inefficiencies in the banking sector, their second-order impact on the end customer, in this case MSMEs, often goes unnoticed.

The MSME credit gap currently stands at INR 25 Trillion. This, despite their significant contribution to the Indian economy and employment. The traditional lending system has failed to account for the unique needs of this sector. Legacy banks consider these enterprises risky borrowers due to their lack of credit history, and find it expensive to disburse the small, short-term loans that they need.

The MSME lending space has been dominated by public sector banks (PSB), but the stress in their MSME portfolio has been high. According to the RBI, as of February 2021, 80% of the MSME borrowers moved into the high-risk category.  This points to a clear need for the demonopolization of the banking sector. MSMEs should have the freedom to choose multiple banking partners that meet their needs effectively.

The lack of effective options for MSME credit has, in part, led to the rise of Non-Banking Financial Companies and FinTechs. These customer-centric, technology-driven companies leverage alternative data such as device and platform data to underwrite customized loans for MSMEs. 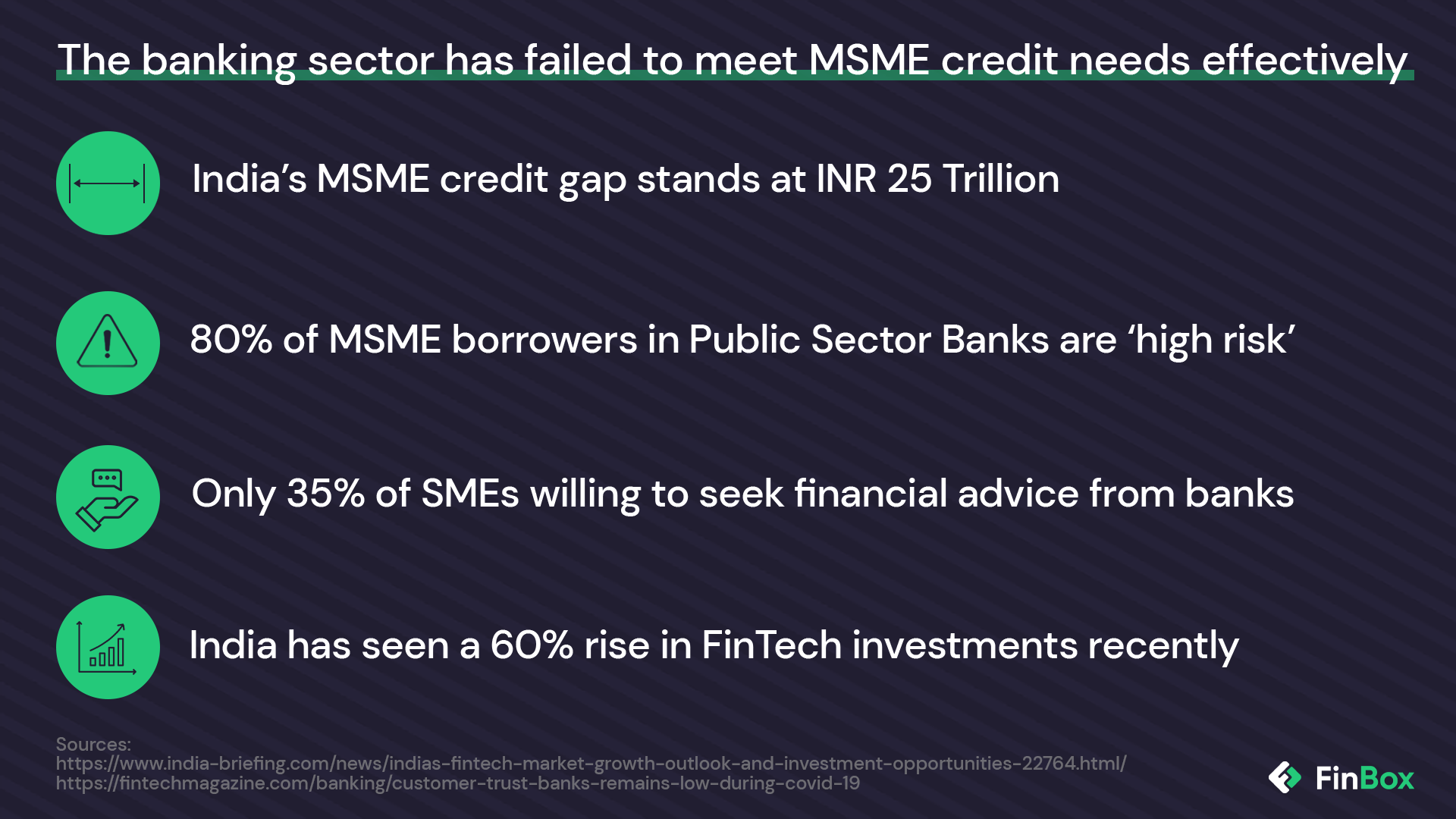 A new paradigm of lending

It’s a new model of lending that accounts for the unpredictability of MSME cash flows and tailors repayment schedules accordingly. In it, lending facilitators partner with banks and customer-facing digital platforms to offer credit to MSMEs at checkout.

Collaboration is thus the way forward. Each player in the ecosystem - lenders, technology platforms, and the customer facing digital platforms, must come together in order to prioritize MSME credit needs, disburse customized loans, and ensure small businesses run smoothly.