The Pattern #7: Five worrying trends that FinTech founders are ignoring 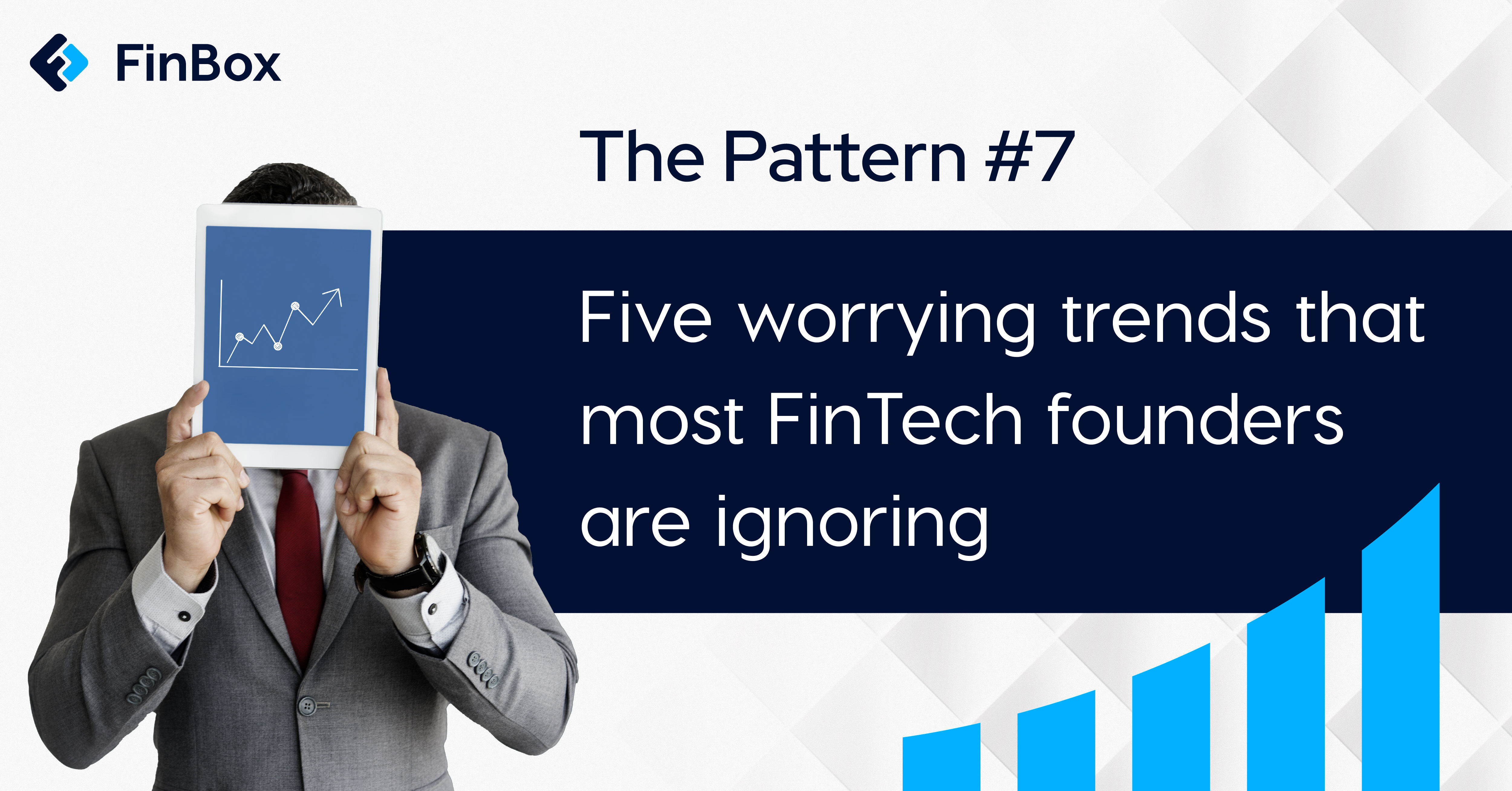 Welcome to the seventh edition of The Pattern - your weekly dose of all things interesting in the world o finance, technology, and economy. Let’s dive right in.

FinTechs are in for a world of pain in the coming few quarters. I am not being an alarmist but the trends are there for all to see - except – almost nobody is discussing them out loud.

It’s evident that the din of funding celebrations and PR-driven announcements is drowning out the rumblings of the shift in the way Indian economy, consumers and regulations work that could be speed-breakers on the FinTech highway, if not worse.

Fasten your seatbelts, it’s going to be a bumpy ride.

Customer acquisition will be prohibitively expensive

Two years ago, FinTech growth leaders were complaining about not having enough budgets to acquire customers at scale. The funding wave changed all that.

Flush with money, companies started not only spending a bomb on inorganic acquisitions but most also brought back the financial incentive gravy train that should have ideally stopped with the mobile wallet craze.

Now, the reserves are depleted and bidding wars in the advertising space have meant that the average cost of acquiring a customer has shot up almost 5X from last year. For instance, most digital lenders pay anywhere from Rs 450 to Rs 500 for getting just one customer to start a loan application.

Now, it’s in the range of Rs 1500-Rs 2000. In fact, it’s set to get much worse in the coming quarters as fintechs are pushed for growth and VCs start asking the tough questions about the projections presented at the time of pitching.

At the same time, the organic acquisition channel is all but dead. Just ask banks and NBFCs and the money they dole out to advertisers, sales callers, and mass WhatsApp broadcasters.

Bottom line: Customer acquisition costs will become unsustainable for most companies and almost everyone is going to find it hard to keep growing with diminishing returns in terms of LTVs.

There’s a lot of noise online on how fast India is digitizing and how India has one of the best fintech adoption rates in the world. However, it’s mostly powered by hope as a strategy.

Yes, customers are fast adopting smartphones and internet services. Especially in the financial services space where banks are seeing most of their existing business relationships move online (apps) from offline channels (branches).

But it’s not clear yet how many net new users are being added to the financial services ecosystem. If one looks at the top cohort of the Indian population - the one based in large metros such as Delhi, Mumbai, Bengaluru, Pune, etc - the total addressable market is itself 110 million, less than 10% of the total population.

Further, drill down into this, and we find that the country’s largest bank SBI doesn’t even have anywhere close to ~50% population coverage. Meanwhile, many of the FinTech players such as Paytm, GooglePay, etc rest on much smaller penetrations with most catering to a similar set of users. (Take a look at my colleague Shamolie's piece on rural financial inclusion here).

This has always been a problem with India that the market tends to be very top-heavy and most users have about 5-6 active relationships with vendors in the same category. Remember Jio and Airtel? When Jio launched, it posted blazing numbers and it took a while for the realization to set in that most people bought Jio SIM cards for free data and used it as their second SIM card (most Indian phones support dual SIM cards). 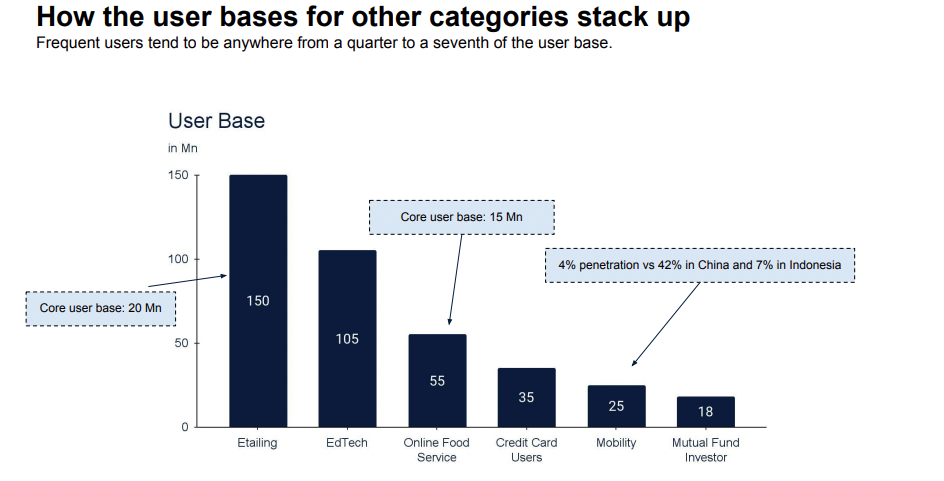 Coming back to FinTech, there are 35 million credit card users in the country, and estimates by Blume Venture suggest that frequent users tend to be between a quarter of one-seventh of the user base. That puts the number of active credit card users at anywhere between 5-9 million. Delhi’s population is 6 times larger.

Bottom line: Lots of FinTechs with bloated numbers will find an uncomfortable source of truth in their active user data and perhaps deflate that number with average overlap per customer to arrive at a more realistic wallet share.

RBI gets new teeth - Fall in line, or fall by the wayside

For a very long time, the Indian FinTech space has enjoyed relatively light-touch regulation, if at all. FinTechs evaded oversight by morphing themselves as digital distributors or a technology layer on top of core banking systems. That changes now.

Fiascos from collection agent harassment to Chinese lending apps stealing data to recent controversies at major FinTechs have certainly ruffled feathers. The RBI is now coming after all emerging FinTech sectors and laying the ground rules down.

Be it the recent notification telling credit card companies to not overcharge or mislead users or its frequent updates to data privacy policies, data sharing, and audit structures - the regulator has decided to pick up the broom and do a deep cleaning.

On its radar will be any and all FinTechs that are suspected of indulging in dodgy data collection/use practices, questionable operational ‘arrangements’, or any misuse of licenses through a wilful misreading of the regulatory directions. Playtime is over.

Most investors have woken up to not just corporate governance but they need for their portfolio companies to make money at some point on the horizon.

This is going to be an especially tough ask for a chunk of companies, especially in the FinTech space. Here, the margins are wafer-thin, if any, and start dipping into negative as soon as one accounts for the cost of acquisition, retention, and marketing blitzkrieg. 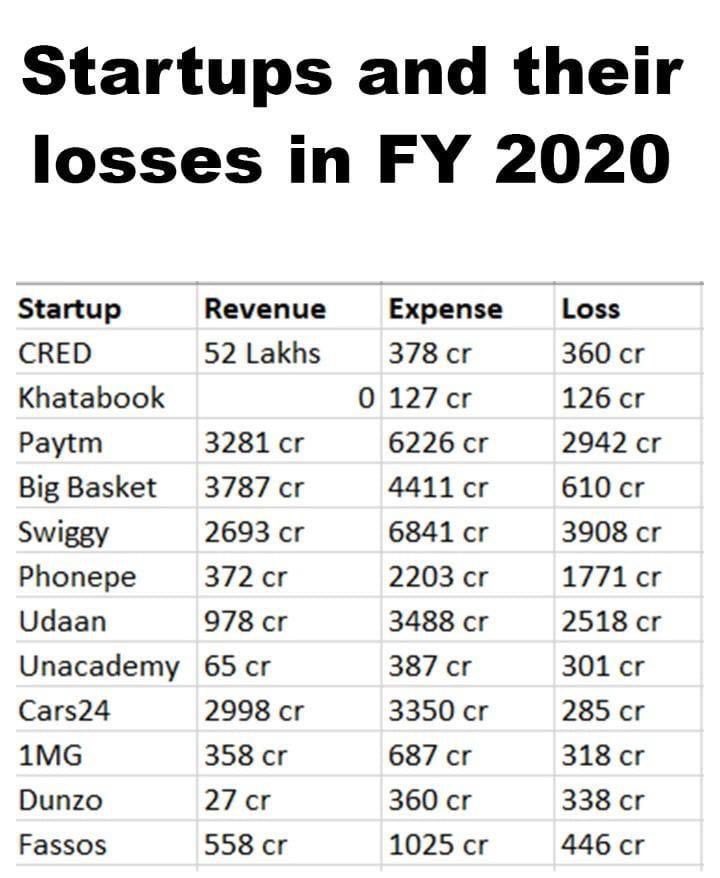 This is not to say that all companies will fail to generate positive cash flows but it’s going to become increasingly important to have that on the roadmap instead of just focusing on growth for the sake of growth (in biology, they call it cancer, by the way). Bottom line: This is the time when FinTechs have to brainstorm their way out of building a positive LTV business or the candle of funds will start to burn from both ends.

One is whitespace, three is a growing market, dozen is a crowd

The promise of FinTech so far has been on either of the two broad axes - either it improves the user experience and distribution (UPI apps, brokerage apps, insurance aggregation, etc) or it solves a problem that existing players have missed out on (mobile PoS, alternative credit scoring, infrastructure plays, etc.)

The first category ideally looks for growth in the B2C segment and hopes to edge out other players by being a big fish in a big pond - thereby opening doors to more cross-sell. The second category aims to go B2B and hopes to build revenue through enabling businesses rather than fighting the expensive customer acquisition battle.

But the key idea for both these plays is the same - grow large enough and build a walled garden that locks customers in and enjoys the fruits of toil.

Except, the walls aren’t as strong as one would suspect.

For starters, financial institutions such as banks, large brokerages, and even modern NBFCs are coming after this pie. The FinTech unbundling of BaaS has meant that banks have tasted blood and now most are no longer happy being the license provider - bad news for neo-banks and other technology layer players.

On the other hand, large enterprises no longer want to part with their customers’ data, loyalty, or wallet share. Tata Neu was just the beginning and one can expect a lot more forays by large corporations into the FinTech and D2C space.

And these are the companies that also have the free capital to invest in building or buying extremely sophisticated solutions because, at scale, even a 0.1% interchange fee can generate a quarter’s worth of free cash flows.

Bottom line: FinTechs have to rethink moats. It’s no longer the product that can do the differentiation. It will have to be the ecosystem around it - from communicating value to delivering it and having backup plans in case the license holder goes AWOL from the relationship.

Phew, that was a really long one. I hope you enjoyed reading it as much as I liked thinking it through and putting it together. If you did, it’s time to leave you with some more interesting reading recommendations.

If you enjoyed this edition, do share it with your network and write back to me. You can also follow me on Twitter and connect with FinBox on LinkedIn to never miss an update.