The Pattern #17: How many lawyers does it take to run a FinTech company? 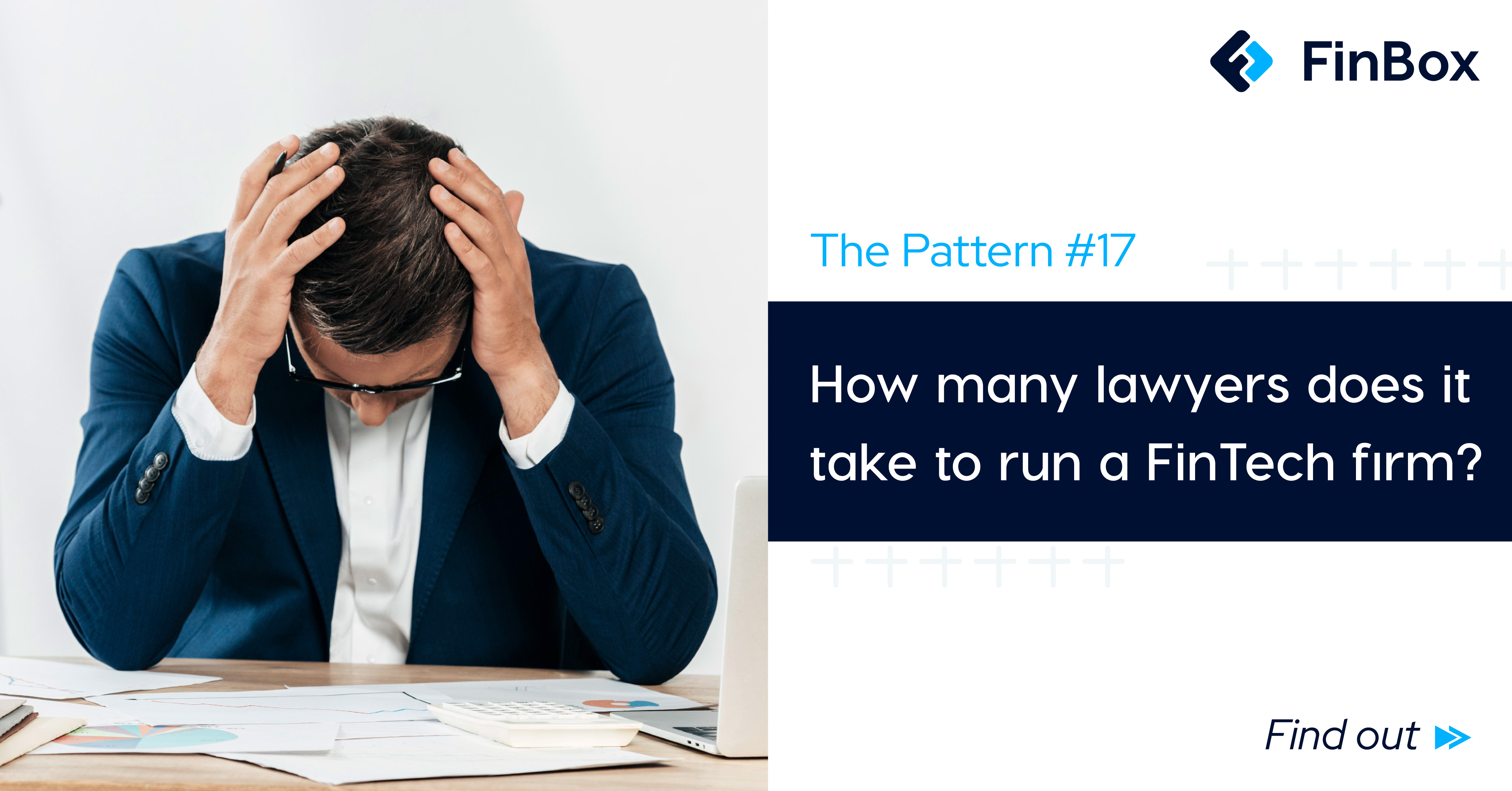 Hope you had a good week. Let me tell you about a certain Monday evening.

On June 20th, a circular from the RBI immediately burned billions of dollars of FinTech valuations and VC money along with it. Turns out, the regulator had had enough of companies offering Buy Now Pay Later products by craftily using/renting the pre-paid instrument licenses of banks and NBFCs (the same ones that gave birth to mobile wallets).

What happened next? Like any 80s thriller - lawyers took over the scene.

From India’s biggest law firms to the smaller boutique FinTech specializing outfits - anyone who could have helped was called to help.  The FinTechs inked retainers faster than one would scan a QR code and started what would perhaps be a first for many of these newbie innovators - a legal sprint.

Not a product sprint to launch a new feature.

Not an engineering sprint to stress-test network security or fix latency issues.

It was a legal sprint.

A legal sprint to pore over thousands of pages of government regulations, RBI guidelines, and reading between the lines. The idea was to build a case that BNPL cannot be shut down just like that.

When there are more lawyers in a FinTech company's office premises than engineers - one can safely assume that something has gone awfully wrong.

Every week since, we have heard of ongoing lobbying, appeals, back-channel talks, and representations to the regulator. The result? Not much.

Just today, stories surfaced that LazyPay has put its BNPL service on hold while others such as Slice have already updated their terms and conditions and stopped offering their flagship interest-free BNPL product.

The deep end of the regulatory pool

One can argue about the impact or the motivation of the notification.

But what’s not in the realm of debate is the fact that most FinTechs have little to no experience in dealing with regulators, policymakers, and the engine of bureaucracy that makes the wheels turn in the financial services space.

This is from a recent story about RBI rejecting a bunch of companies’ applications to become payment aggregators. More on this later but read this quote.

“Many of the companies who applied had no knowledge of payments. “Some of them have not even read the eligibility criteria. The memorandum of association, a legal document that represents the charter of the company, did not mention that they can do payment aggregation—in about 20 applications," he said.

Some of the applications, he added, were returned due to technical gaps. There are 32 points on data and IT security, which an aggregator has to have before submission of applications.” - Mint story quoting Ram Rastogi, a governing council member at FinTech Association for Consumer Empowerment, a non-profit outfit.

If you think about this long enough, it’s pretty difficult to arrive at a conclusion that FinTechs would be able to get the RBI and the government and the judicial authorities on their side by the sheer force of lobbying and legal challenges. Especially on the issue of BNPL (and that too using a regulatory licensing arbitrage), that’s being battered the world over.

It didn’t work out for the cryptocurrency exchanges, it’s unlikely to work here.

It’s because Indian banking and financial policy systems have the complexity of a highly developed capitalist economy with the helicopter parenting tendencies of a welfarist state.

Banks know this only too well. So do dozens of conglomerates with all the money and legal resources of the world at their disposal but still denied an on-tap license from the RBI for not meeting the ‘fit and proper’ criteria.

It’s time FinTechs learned the rules of the game.

Beginning of the end of loophole innovation

India is one of the hottest countries for FinTech. It has an adoption rate of 87% versus the world’s 60-odd percent average. It has got some ~3,000 active FinTechs and has a digital payment infrastructure that’s the envy of the world.

But, at its very core - it’s still a developing country with cautious regulators and a policy framework that’s hardwired to protect the economy from extreme shocks and at the end of it all - care for the best interests of the last mile citizens. This is the birthing ground of all the confusion and what seems to an outsider like a teenager with two personalities - a rebellious one for their friends and a demure do-gooder for home.

But I’d like to argue that it’s not a case of a confused stance. Rather, it’s the case of a stance of extreme clarity - except clarity that’s more tacit. It’s yet to be articulated in the legalese that sits well with the likes of big law firms on retainers being paid to file 40 different compliance documents every month. They don’t charge for the effort, they charge for the responsibility of ensuring a noiseless operation of the policymakers’ will.

For instance, the core issue around the PPI licensing and BNPL seems not that of stifling innovation but that of misusing the license whose intent was to promote savings and digital transactions. The regulator may have been more lenient had these businesses worked in tandem to clarify the policy framework and communicated the contours of this ‘innovation’.

It sounds like the antithesis of a startup’s values of innovation but financial services are no playground. It’s other people’s money on the line and Indian regulators are perhaps the most valiant when it comes to defending the rights of a citizen.

India is a difficult country to crack a viable FinTech business. That’s because the government is more proactive at solving inefficiencies than one would expect. This means that where entrepreneurs in the West get to build billion-dollar businesses by solving for systemic inefficiencies - in India, you get the infrastructure and the core rails for free.

This is something we’ve written about a lot - from how the UPI rails created a digital payments revolution and enabled cash-flow lending among other use cases to how GSTIN created a nationwide infrastructure for invoicing, taxation and it’s now enabling a bunch of business use cases - working capital financing, invoice factoring, trade financing, and insurance among others.

By directing public sector banks to quickly onboard themselves on the AA network, the government has done what years of FinTech innovation would struggle to achieve - a comprehensive, secure, and most importantly, open financial information aggregation infrastructure. The utility of AA is invaluable to financial institutions when it comes to its use-cases in digital lending, insurance underwriting, and so on.

At FinBox, we have seen AA boost conversion rates for our lender partners dramatically while the fraud associated with bank statements reduced to zero! You can read a detailed case study here.

And AA is just the beginning. There’s an entire laundry list of public infrastructure protocols in the works that will unlock a whole new era of digital solutions.

This all leads me to my main point - it’s hard to build a FinTech company that makes a decent amount of money anywhere - doubly so in India, because the base-level problems are being solved and given to you on a platter.

An entrepreneur can either innovate on top of this stack and build solutions that take advantage of this infrastructure or go the distribution route and build clever channels to distribute existing products and services.

But what one clearly can’t do is run a modified electric bike in the name of mobility on the rails provided by the government when the set standard is for everyone to run a broad gauge high-speed train coach.

I hope we figure out how to build reliable trains. The rails are waiting.

This is all from me this week. Leaving some reading recommendations below.

2. 74% of MSME credit disbursed under ECLGS since pandemic, says SBI

3. Why India Is No Fan of Buy Now, Pay Later

4. Lending for Bharat: How WhatsApp, APIs, and sachet loans will bring credit to millions of Indians

I will see you next week. Thank you for reading. If you liked this edition, do forward it to your friends, peers, and colleagues. You can also connect with me on Twitter here and follow FinBox on LinkedIn to never miss any of our updates.