The Pattern #2: Of rude awakenings, the great levelling and late entrants 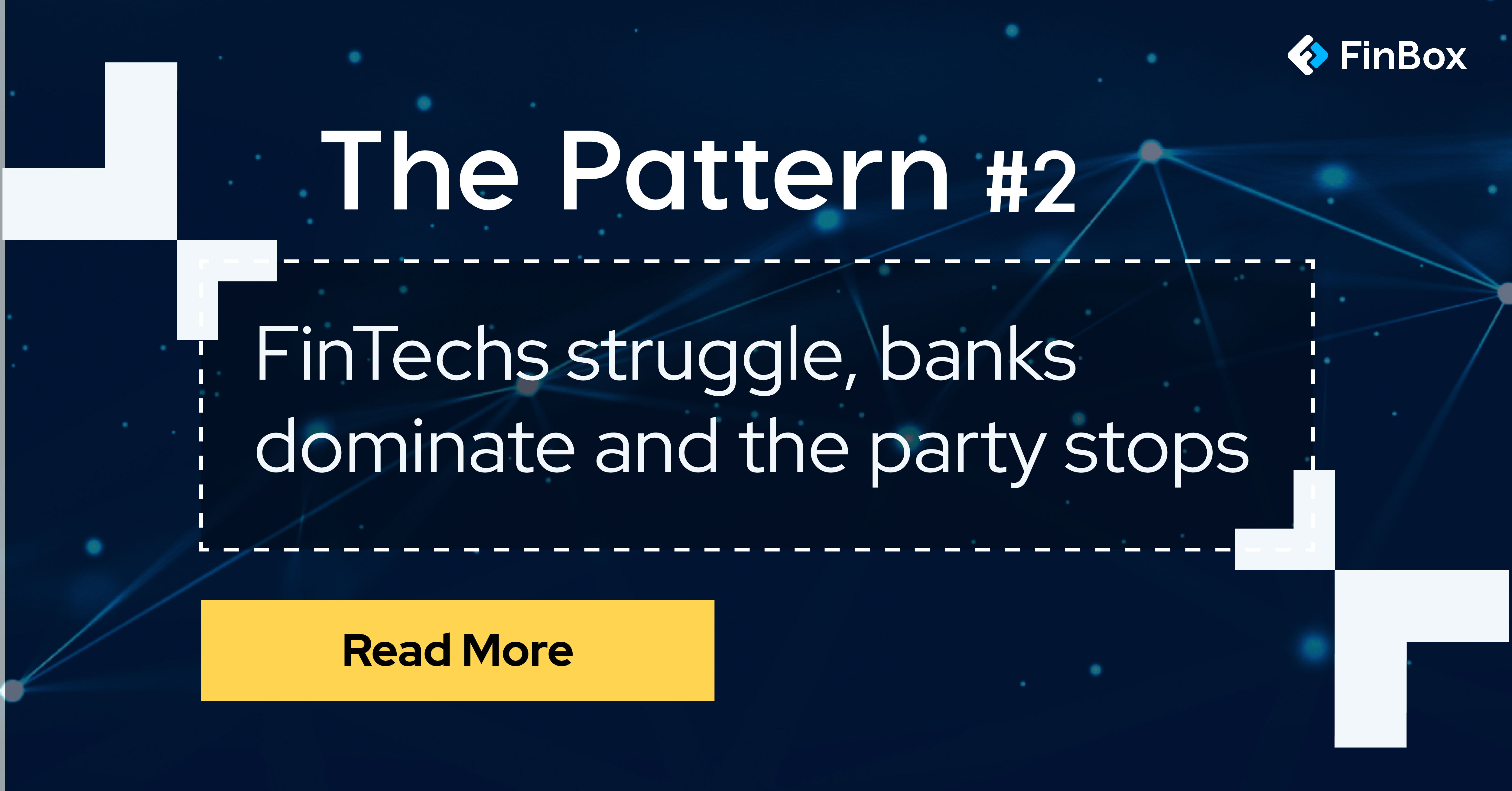 It’s funny how the narrative around ‘first-mover advantage’ suddenly flipped on its head. Once considered a natural holy grail to invent something out of thin air, the idea that you need to be the first in the market has gradually lost favour. Just look at how all Facebook did was make a better social network than Myspace, or how Apple created more pleasant computers than IBM or Microsoft could and created probably the world’s biggest monopoly.

In fact, Peter Thiel takes this idea to the next level and posits that it’s much better to be the last big innovator in a category and enjoy decades of monopoly profits.

“It’s much better to be the last mover—that is, to make the last great development in a specific market and enjoy years or even decades of monopoly profits. The way to do that is to dominate a small niche and scale up from there, toward your ambitious long-term vision.” - Thiel, Peter. Zero to One (p. 45)

I have a feeling something similar is afoot in the world of FinTech. Sit tight and hear me out.

Just yesterday, Moody’s released a report making a rather bold claim. It predicted that even though FinTechs have conquered the payment space, the banks have little reason to worry. At least the private banks and big public banks such as the State Bank of India.

Moody’s claims that the gains in the payments space are unlikely to follow in other areas of banking for FinTech especially in the light of banks rapidly digitizing and upping their game. The research agency said that it’s because banks have the same access to data as FinTechs do and without banks, UPI transactions aren’t possible at all anyway.

Will the new UPI123Pay launch help or hurt FinTechs? My colleague Aparna Chandrashekhar figures it out in this must-read piece.

“Therefore, banks, either as PSPs or deposit account owners, have access to transaction data as FinTechs do. Also, customer funds stay in bank accounts. Because of this, FinTechs' dominance in digital payments does not result in a significant data advantage over banks.”

Banks may not build the next Amazon, but they know how to make money.

Add to this the burns sustained by FinTechs in acquiring and retaining these customers, and the cost of digital payments run into thousands of crores of rupees of (largely) VC money. For instance, Paytm incurred losses amounting to more than 26% of the net profits that ICICI Bank made in the year ended March 2021. And Paytm isn’t the outlier. PhonePe has registered similar kinds of losses.

On the other side of the aisle, banks are improving their profitability with a consistently declining cost-to-income ratio through the gains accrued due to digitization.

FinTechs are both the enemy and the white knight

Even as larger banks strap themselves in for a continued battle to protect their turf against the onslaught of FinTechs, it’s not as one-sided as it appears. FinTechs and banks have complementary strengths. While banks have the capital reserves, consumer trust and the regulator’s blessing, FinTechs have the speed, technology and distribution.

This is a fertile ground for a win-win-win partnership. Banks can protect and increase their dominance, FinTechs can build new moats that bring net revenue and customers benefit from seamless experiences across payments, embedded credit, insurance-tech and other such areas.

Smaller private players and public sector banks should really look into this strategy. Partnering with the right FinTech can revive a faltering business and even boost it into a new orbit altogether. My colleague Shamolie wrote this piece recently arguing that banks should build new superpowers by partnering with infrastructure FinTechs to go the Amazon way.

The great levelling is upon us

If there’s one thing that could level the playing field further for banks is the regulatory oversight. Most FinTechs currently operate in a regulatory grey zone with an impending fear of either the Reserve Bank of India or other regulatory agencies pulling them up for misdeeds.

Indeed, Paytm Payments Bank received a lashing recently for not complying with certain data privacy and storage norms. It was even asked to stop onboarding new customers. Meanwhile, RBI is setting up norms for an independent audit that Paytm Payments Bank must go through and change its onboarding and data processes before the ban is lifted. The result? Paytm’s stock price tumbled to Rs 602 as on Thursday - a 22% fall in this week itself.

However, it would be unfair to assume that it’s only Paytm that’s bearing the brunt - FinTechs across the industry are battling KYC leakages, consumer trust deficit and regulatory actions that threaten their very existence.

Additionally, there has been a steep correction in FinTech funding, valuations and investor sentiment around the world due to the global markets crash and the slow-sinking realisation that paths to profitability are mostly long-winded and treacherous. Do read this piece by my colleague Anna that outlines a lender’s path to positive unit economics.

As a result, going forward, FinTechs are expected to be evaluated on a more stringent basis - be it by the investors or the regulators. Will the gravy train finally stop? We’ll just have to wait and find out.

The recent bloodbath on the markets has seen prices trip up for most major startups including Zomato, Nykaa, PolicyBazaar and Paytm, to name a few. Obviously, this has led other startups to tread carefully and IPOs have been delayed en-masse.

Next up is likely to be the Navi IPO is upon us while LIC’s mega IPO is said to have been pushed till May to allow for the markets to calm down. If you are yet to catch up on the LIC IPO, I suggest reading our CEO Rajat’s post dissecting the LIC numbers - especially important since the latest results suggest that LIC’s growth is slowing. There’s also this post around LIC’s digital innovation moves and what it means for the insurance space.

Even as disturbing news around mass layoffs made their way from the stables of Better.com that laid off close to 4,000 employees and Trell is laying off hundreds of employees amid a fraud/governance probe, there’s some solace in hard-working founders and employees finding better outcomes than that.

Razorpay has been on an acquisition spree and has just finished the acquisition of IZealiant Technologies to further boost its offering stack. Meanwhile, Perfios has grabbed debt intelligence platform Karza.

Parallely, BharatPe is literally gunning for the gold as it enters the gold loans business with a rather ambitious target of disbursing Rs 500 crore worth of loans in this year.

As the Indian startups see employees come and go through the forever revolving door, do read this piece by our CEO Rajat if you are looking to assemble a FinTech team or this piece I wrote around the anti-Amazon strategy I use to build teams.

Tl;dr: FinTechs have a lot to do before they can threaten banks’ profits and banks have no time to rest if they have to defend their turf. Partnership can be the peacekeeping force but without well-defined rules of engagement and common goals, it’s doomed from the beginning. While the regulator catches up to FinTech’s speed, smart leaders will do well to ask the tough questions of themselves and their teams before the RBI and their investors do.

This is all I have for this week. Leaving some recommendations for interesting reads below.

Special mention: This in-depth whitepaper put together by our co-founders Rajat and Anant along with my colleague Vasavi on how risk can be a growth strategy for lenders. Do check it out here.

Thank you for reading. If you liked this edition, do forward it to your friends, peers and colleagues. You can also connect with me on Twitter here and follow FinBox on LinkedIn to never miss any of our updates.