The Pattern #35: As cash comes back to life, fintechs get existential 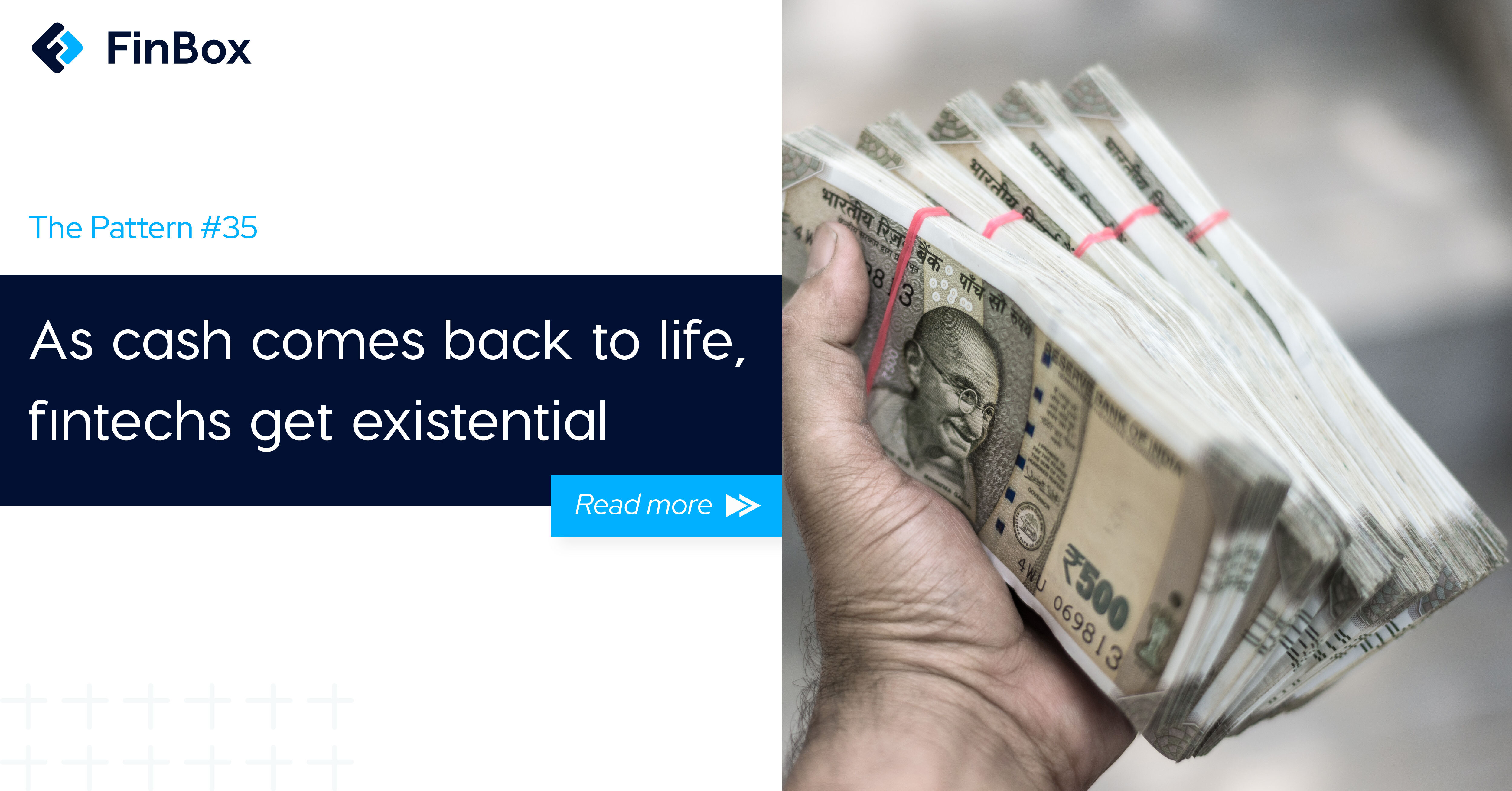 Hello and welcome to the 35th edition of The Pattern!

Just last week I wrote about the rising popularity of digital payments in the country - but such is the dynamic nature of finance in India, that one may be forced into slightly contradictory positions week on week.

According to data from the Reserve Bank of India, in the fortnight ending Oct 21, circulating currency in public hands stood at a record high of INR 30.88 lakh crore. Funnily enough, this number is 72% higher than the INR 17.97 lakh crore registered on Nov 4, 2016, before demonetisation was announced.

A recent survey found that this popularity of cash can be attributed to the immediacy and ‘feel’ of money. Also, added factors include the festive and wedding season and a large recalibration of personal finances in anticipation of the returns filing time.

I think we can all agree that is one of the biggest hurdles digitisation faces in its path to universality. Cash has been around for nearly a thousand years, and there’s a sense of security attached to it that Indians can’t let go of. In fact, even as digital payments soared during the height of the pandemic, Indians continued to hoard cash for emergencies.

Clearly, a wad of cash in a bedroom cupboard evokes a sense of safety and certainty that a UPI app can’t compete with.

We’ll have to wait and see how digital continues to create a sense of trust among Indians - especially those beyond the metros, for whom cash has been king through thick and thin.

However, digital continues to power through, with the support of government and private bodies alike. National Payments Corporation of India (NPCI) recently announced the launch of the BHIM App open-source license model. Very simply put, this move will allow banks to offer UPI with a ready UPI application with minimal effort and cost. UPI transactions already rose by 7.7% to INR 730 crore last month, and this announcement is bound to give it another significant push.

As the cash vs digital battle rages on, it’s time for me to pivot to the elephant in the room - layoffs. I’m sure I speak for most when I say my LinkedIn homepage now reads like a list of heartbreaking stories of talented individuals losing their livelihoods with one devastating email.

And while everyone’s talking about Twitter and Meta, it’s easy to forget that the FinTech space is in the same boat. Chargebee laid off 10% of its staff, Stripe laid off 14%, and Chime, 14%.

Once again, I hate to say I told you so, but, I told you so - specifically, in The Pattern #7, way back in April.

I’ve always been sceptical of growth for growth's sake, and I’ve consistently maintained that most FinTechs are far from business viability as unit level profitability is incredibly high to come by.  In the glitz and glamor of state-of-the-art products and the excitement of funding announcements, we sometimes forget that the foundation of running a business - any business - lies in turning a profit. Because FinTech products are now a dime a dozen, and third-party funding - well - it runs out. And when this happens - it’s the people who become collateral damage. Sustainable growth may not be exciting, but it works. And if you’re looking to join a FinTech that’s on rock-solid footing, we at FinBox are hiring across roles. Just write in at hiring@finbox.in. That’s all for this edition - once again, here are my favorite pieces of content from this week: