The Pattern #39: When the RBI says FinTechs won’t eat banks, believe it! 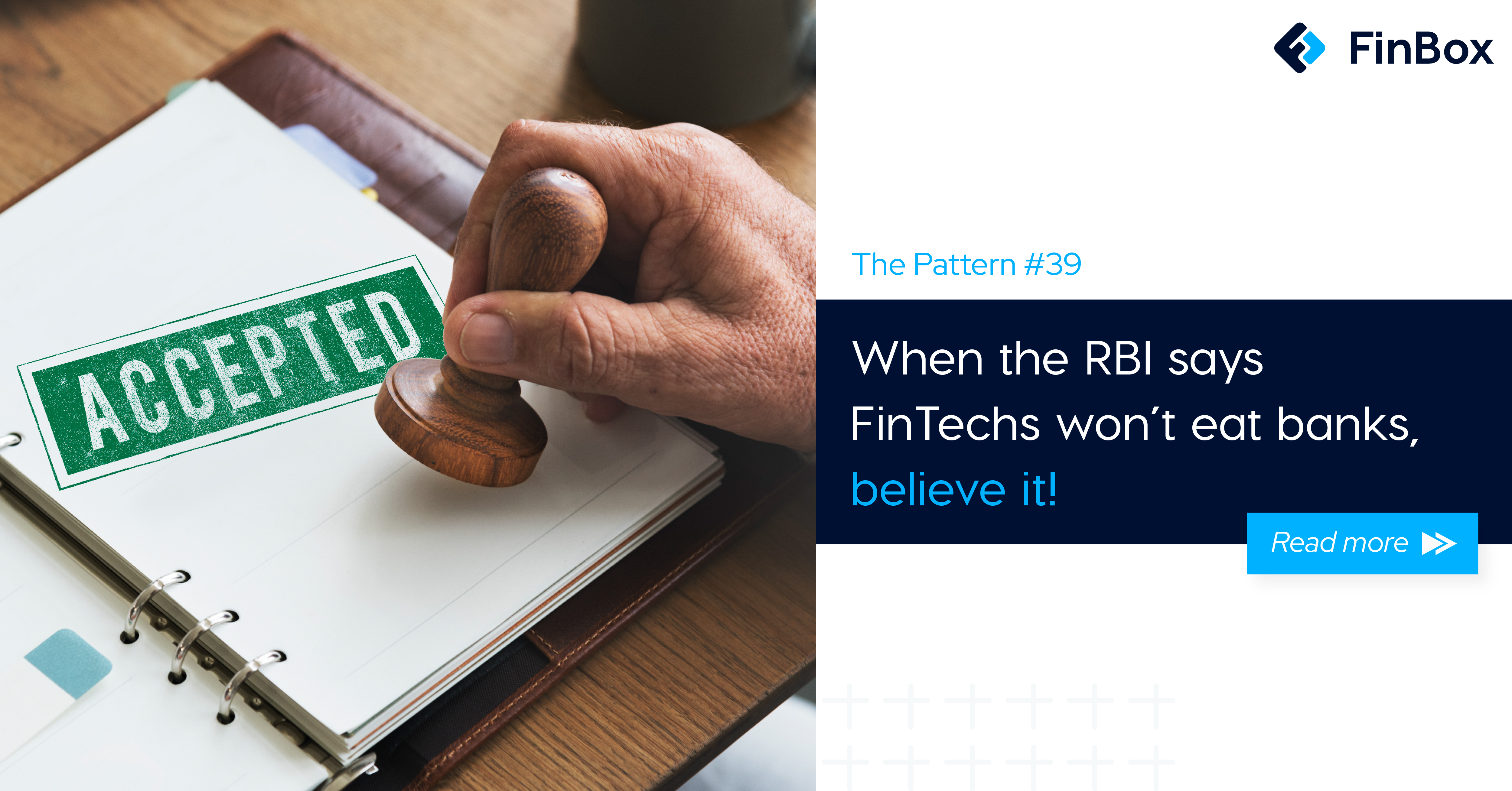 Welcome to the 39th edition of The Pattern, a weekly newsletter where we untangle the rumblings from the world of finance, technology, and the economy. It’s been an action packed week with mostly good news. Let’s get started.

While the UPI story has been well told and documented, it’s still in its first chapter. India’s flagship payments interface has ushered in an era of innovation by enabling real-time seamless bank transactions between individuals and merchants.

However, the beauty of UPI lies not just in its ability to transfer funds but in its framework that allows people to request money. This is a key differentiator as it turns the payments interface into an ecosystem - on top of which businesses can build products and use-cases.

Now, the RBI has made further updates to the platform as the central bank announced that it’ll enable single-block-and-multiple-debits functionality. This means that users will now be able to create a mandate at their end to pay a merchant/business later with funds remaining in their account until services are delivered.

This unlocks new use cases such as hotel bookings, buying secondary market securities, or even paying for pay-as-you-go subscriptions, as merchants will technically be able to make multiple debits on a person’s account, given that the mandate is set up.

While UPI has had the bulk of media attention, its cousin Bharat Bill Payments System, is maturing fast and starting to come out of the shadows.

The central bank allowed that BBPS will now also support non-recurring transactions and this means that the scope of the BBPS billers will now include educational institutions, tax authorities, and other billers - anyone who wants to collect payments from consumers through a real-time interface. The BBPS journey has been quieter but no less strong than UPI’s, and it’s exciting to see how UPI, BBPS, AA, and the rest of the India Stack start to play together and enable even more groundbreaking use-cases.

The build vs. buy debate in FinTech seems to be in its final act. Gallons of ink have been spilled in the contemplation of whether banks will eat up FinTechs or whether the new-age contenders will threaten the legacy institutions and steal their lunch money.

However, signs are emerging that both these extremes are likely unfounded and a remote possibility considering that the partnership play is gaining traction.

We’ve written a lot about the value of partnerships in the FinTech space, how to create these partnerships, and even how many platforms can benefit from having multiple lenders on board, and vice versa.

The latest message comes from the RBI Deputy Governor T Rabi Sankar who believes that banking is digitizing fast and changing shape in the face of emerging trends around digitization but none of it means that FinTechs will be able to replace banks.

Sankar has a point. He emphasized the adage that banking is necessary, banks are not. But it’s not the brick walls of the banks that make them important to the financial system - it’s their function as the custodians of public and private money that makes them a key player.

Sankar also added that the options for banks are either to collaborate, absorb or internalize. And he stressed on collaboration as being the more viable option for banks if they are to keep up with the times.

“Banks are here to stay, but banking is mutating fast…It's a misconception to view Fintech entities as a possible replacement for banks” - he was quoted as saying by Mint.

The golden age of partnerships

Elsewhere in the world, it’s a similar tune being tooted by key industry players. The golden age of partnerships between FinTechs and legacy institutions is upon us, according to J.P. Morgan Commercial Banking’s Head of FinTech Partnerships Peggy Mangot.

Mangot spoke at an event organized by PYMNTS where she said that the conversations inside banks are now accelerating on finding the right partnership balance that delivers the most value in building for both businesses and retail consumers.

“The entire industry is much more open and willing to partner on the FinTech and financial services side,” she said. “This is the golden era for partnerships. As a large FI, we realize the wonderful benefits that a partner can bring. Then they also appreciate the benefits that we can bring to them, particularly around distribution,” - she was quoted as saying.

A recent EY report on Indian FinTech trends also speaks of similar themes - ecosystem banking, neo-banking partnership and collaborative innovation. This graphic from the report is perhaps telling in terms of what’ll drive the FinTech bandwagon in the coming years.

“Ecosystem business models produce co-created products and services, marketing to a common set of customers generating more value and providing their customers with the fullest customer experience,” the report predicts.

2%+ - Technical declines rate of SBI’s UPI transactions. India’s largest bank controls 30% of the all UPI transactions and has recorded the highest technical failure rate in the past three years. Kotak Mahindra Bank and Union Bank of India follow it. Why is this important? Because transaction failures on Google Pay reduced the app’s market share by as much as 10% in a year - giving PhonePe the top spot.

50%+ - More than half of all IPO applications in India are already being processed through UPI’s block mandate feature. This is as rapid as transformation gets - considering the feature was launched just a few years ago and investors seem to have embraced it wholeheartedly.

10-12%- The amount of fraud that’s seemingly tolerated in the Indian fintech ecosystem. Crazy.

This is all from me for this week. As always, leaving some reading recommendations below.