The Pattern #5: How many digital banks does it take to make banking digital? 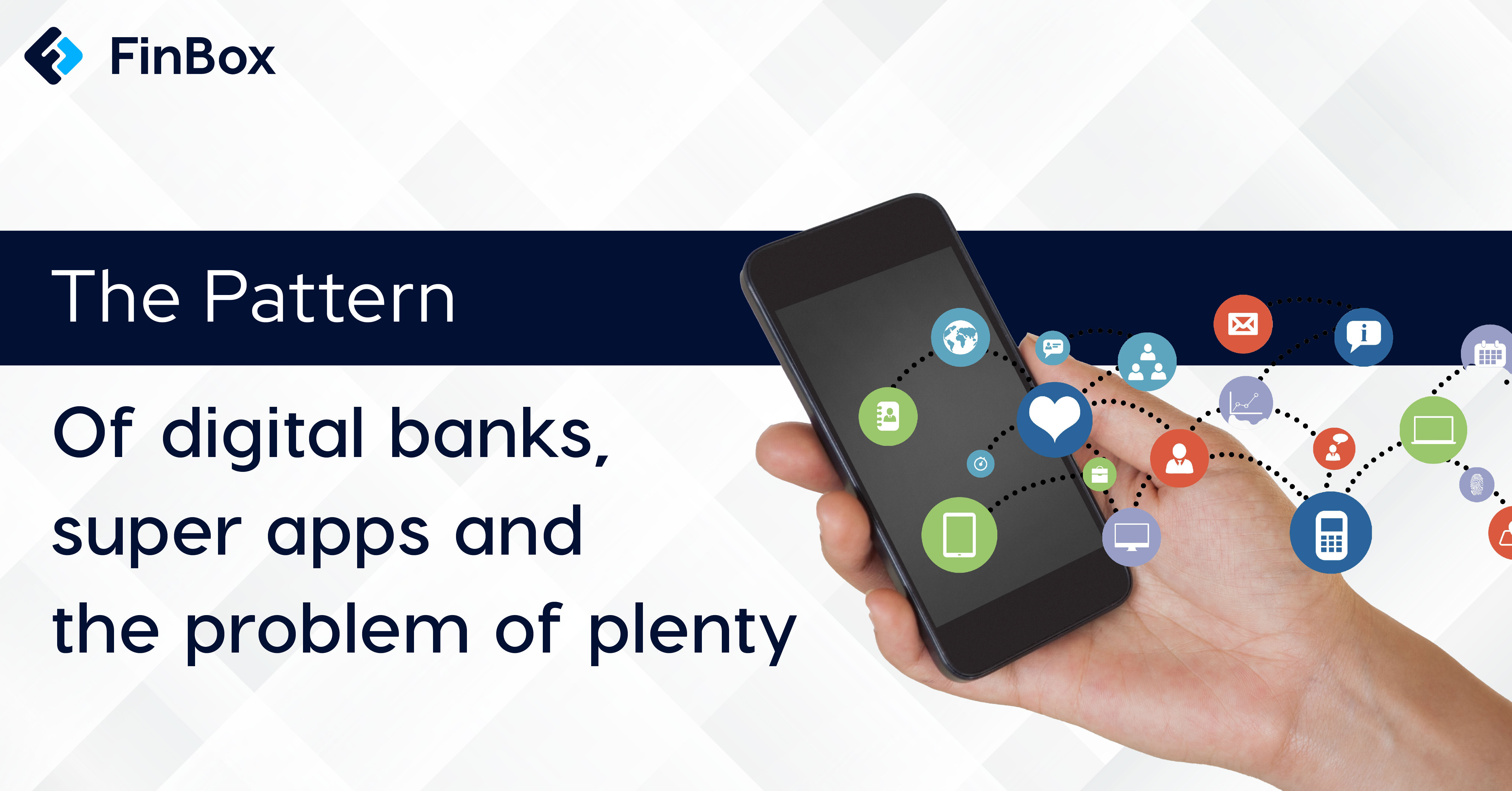 Yesterday, RBI officially stated that digital banking has emerged as the “preferred” channel for availing banking services. It’s official. FinTechs, private banks and research firms have known this for a while but the RBI’s rubber stamp doesn’t hurt. However, like all things with regulators, it’s not unconditional.

In the same sentence, the regulator stated that digital channels are being preferred along with ‘brick and mortar’ outlets. Seems to be a pretty tough blow, right? The promise of digital-first banking got diluted by the endorsement of physical banking outlets before a sentence could be finished.

But, it seems for once, that the RBI has the right idea (with questionable phrasing).

The central bank has thrown open the door for banks to go out and open Digital Banking Units across the country - from Tier 1 to Tier 6 towns. This is to push financial inclusion and adoption of digital technology by allowing banks to be more independent and serve customers through increasingly digital channels. And they can do all this without having to take any permission or a special license. Awesome.

Except, one might ask would a bank open a brick and mortar outlet to push digital banking?

This is where the nuance comes in. You see it is fairly easy to convince anyone that the Indian financial ecosystem is digitizing fast. Just look at how UPI is eating plastic money for breakfast, the skyrocketing demand for digital credit or the performance of FinTechs. But these broad strokes stop working the moment one goes beyond a Tier 2 city and analyzes the penetration of digital banking.

While the smartphone revolution and high speed internet has theoretically brought access to everyone, 70% of the rural population in the country is still not using the internet actively, according to a recent study by IAMAI and Kantar.  In comparison, only 30% of the urban population is not actively online.

Meanwhile, most rural users don’t even use the internet access for things beyond streaming movies or communicating through Facebook or WhatsApp. While 43% of urban users transact online, the number is less than 15% for the rural populace. 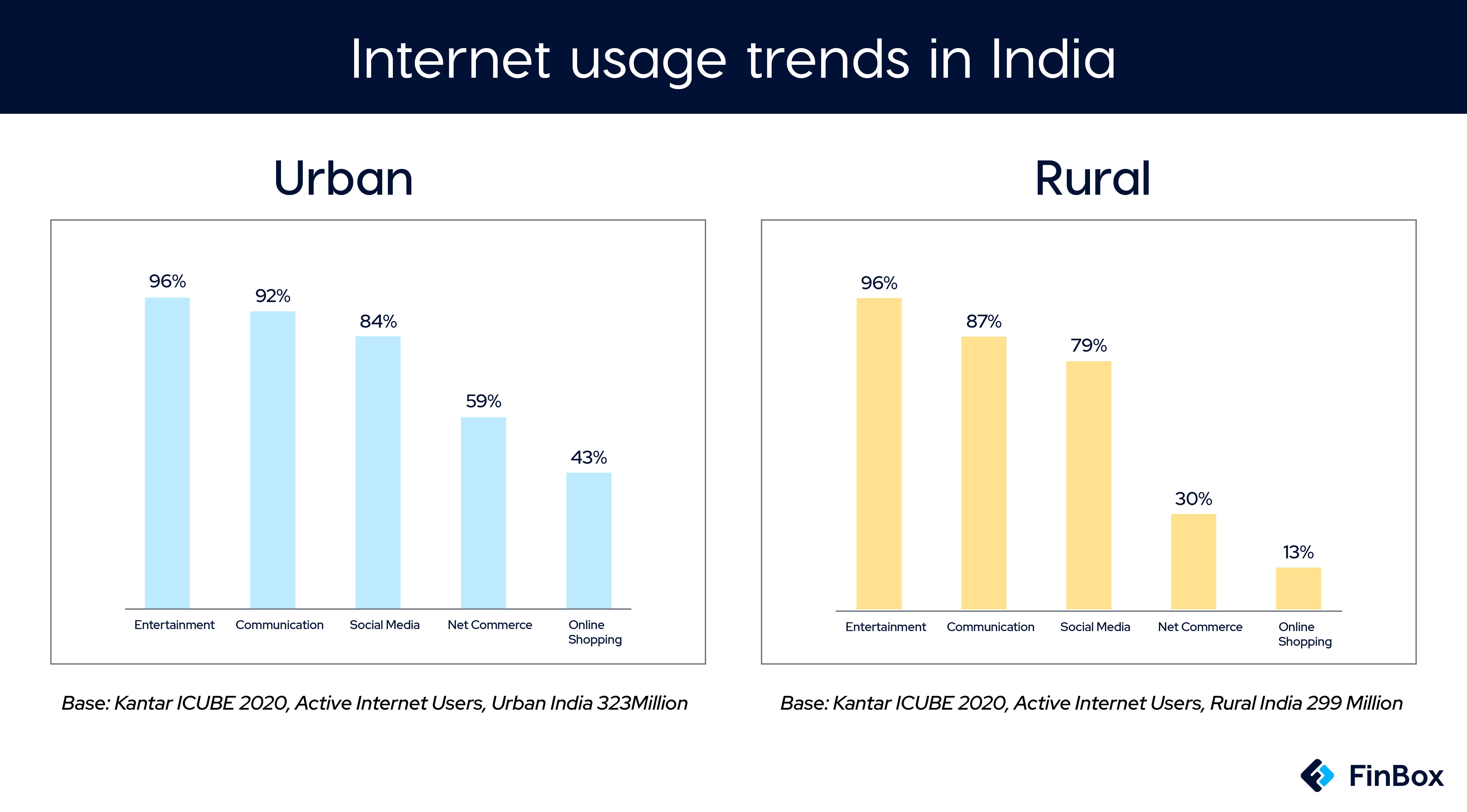 All this points to a singular fact - that access on paper doesn’t translate very smoothly into behavioral shifts or even adoption of new services.

And thus, we come back to the RBI’s plan of ushering in a spread of Digital Banking Units (DBUs). These DBUs will function as independent banking outlets and will be manned by equally competent management as any other bank branch. However, the differentiating factor is that these units will house a large stack of digital services and infrastructure to enable access.

For instance, these DBUs are expected to have: 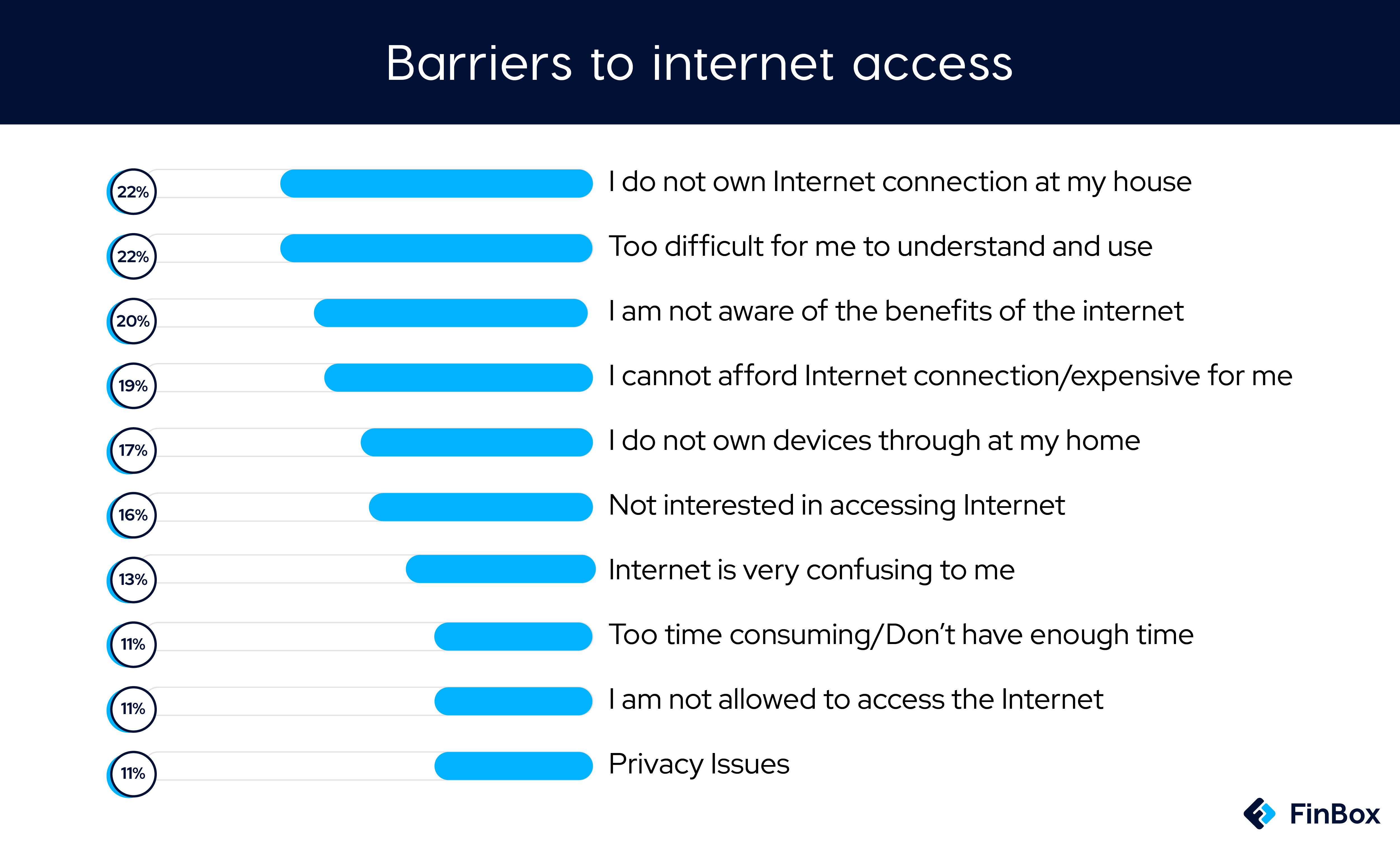 Now, the idea that these DBUs will be brick and mortar based spaces starts to make more sense. First, this will improve access for people who might find digital banking apps too complex or cumbersome. Second, it will provide people with the opportunity to experience digital banking first hand without necessarily investing in a smartphone or an expensive data plan.

Third and most importantly, the DBUs are likely to improve the frequency and use-case penetration of digital banking services. This will not only integrate new financial services users to the fold of the digital economy but also help speed up the deployment of infrastructure like payment terminals, QR codes, ATMs and soft PoS etc. in rural areas as demand picks up. 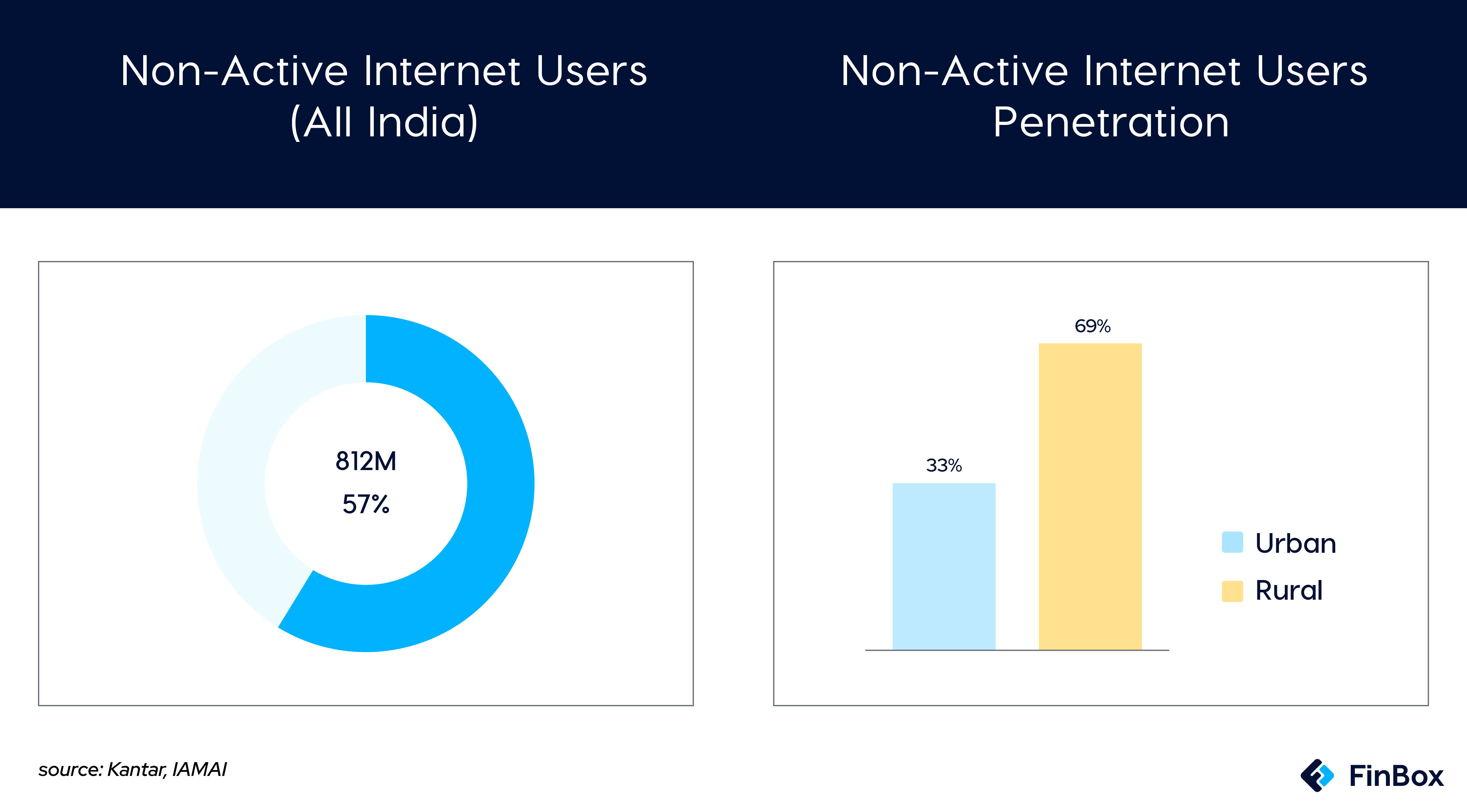 Even though the move by the RBI is commendable and minimal regulatory compliance burden could prompt more banks to set up these new-age digital units, it’s uncertain as to how they will interact with existing channels such as bigger branches or full-service banking outlets.

There’s a certain amount of business uncertainty too that will come with these DBUs since the revenue model will remain the same as any other physical branch but with arguably more DBUs needing to be placed with expensive digital infrastructure costing in both sourcing and upkeep.

This plan also flies in the face of another recommendation about Digital Banks that came from Niti Aayog where the government think tank proposed creating a new category of banking licenses altogether for purely digital banking forays. Even that’s being considered and firmed up.

If Digital Banks see the light of the day soon, we will have a financial services space with:

That’s a lot of players trying to sell savings and credit cards online. Exciting. And scary.

Exciting because every new app/branch contributes in improving financial inclusion and access, no matter how marginally. Scary because it’s an expensive ambition with very thin margins, if any. We have seen the payment banks, we have seen the neo-banks and one only hopes that too many apps don’t end up crashing the phone (and the movement).

While digital banking is going mainstream, India’s super app moment seems to have arrived too. After millions spent in publicity and months of speculation, Tata Group debuted its Tata Neu app that seeks to integrate pin-to-plane offerings of the conglomerate in a nifty digital experience.

In just a few days, the app is already climbing up the trending charts on the app store. This is pretty interesting to see an old-fashioned group like the Tatas enter the digital space with such a big splash and actually succeed in getting people to talk about their app at a time when most new apps by large corporations end up in the digital graveyard.

A lot of the app’s functionality and user experience seems to be work-in-progress but it’s clear that large consumer facing organizations must build and own their ecosystems to retain consumers in the digital age. This doesn’t actually mean building new digital properties but actually reducing them to just a couple and meaningfully integrating offerings to deliver an experience that rivals, if not beats the slick UI and UX offered by the new economy platforms such as Uber, AirBnB or Google Pay.

My colleague Shamolie has written a pretty insightful piece on the super-app strategy and how FinTech is the fulcrum around which the strategy of digital domination is built. You can read it here.

Chart of the week 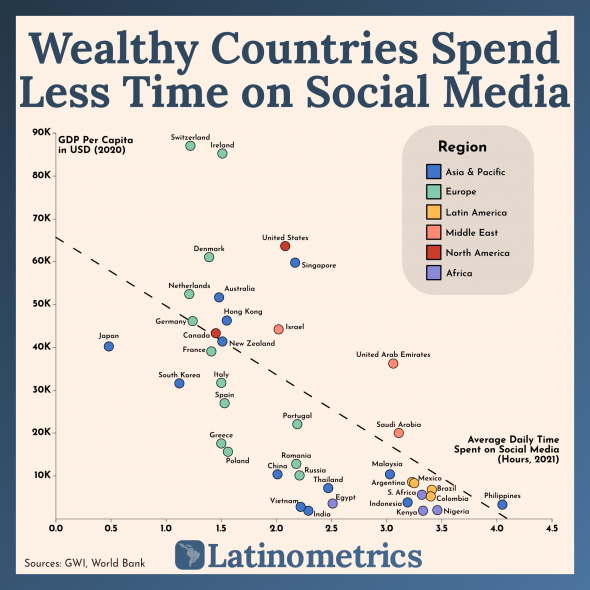 This interesting chart shows a correlation between the time spent on social media vs the relative impoverishment of a country. Hence, wealthier countries are spending less time on social media as compared to the poorer ones. Could actually be because of the age composition (Japan is richer but has a much older population) or because of the population skew itself (most developing countries have younger people vs developed nations aging faster).

In any case, social media isn’t the most productive of activities and with the exception of Elon Musk, people who spend lesser time on social media in favor of reading books or pursuing hobbies do tend to win out in both income prospects and overall happiness.

That’s all from me for this week. Here are some interesting reads for you.

2. US and its obsession with reverse mortgages continues. Read it here.

3. A world beyond cash: What to expect in digitalization and fintech-led world

6. We have enough telemedicine apps, but who’s solving for the paucity of doctors? Read it here.

7. Indian startups may see a shift in pace and quality of VC deals in 2022: Report | Read it here.

8. Being a female in FinTech. Read here.

Thank you for reading. If you liked this edition, do forward it to your friends, peers and colleagues. You can also connect with me on Twitter here and follow FinBox on LinkedIn to never miss any of our updates.